watch 00:59
The Loop (Movies)
Do you like this video?
The Indian in the Cupboard 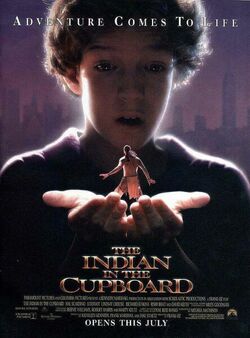 The Indian in the Cupboard is a 1995 American fantasy-adventure film based on the children's book of the same name by Lynne Reid Banks.[1] The story is about a boy who receives a cupboard as a gift on his ninth birthday. He later discovers that putting toy figures in the cupboard, after locking and unlocking it, brings the toys to life. Their names were little bear And Boone

On his ninth birthday, Omri (Hal Scardino) receives an old cupboard from his brother Gillon (Vincent Kartheiser) and a little Indian figure made of plastic from his best friend (Rishi Bhat). That night, Omri goes through his mom's box of old keys and finds that a gold colored key with a red ribbon tied to it (given to his mother by her grandmother) actually fits the keyhole of his cupboard. He then looks for an object to lock in the cupboard and settles for the Indian figurine.

The next morning, he hears a small tapping noise coming from the cupboard. Omri opens the cupboard and finds a small living person hiding in the corner. It is actually the Indian figure who has magically come to life in human . Frightened by his large acquaintance, the Indian pulls out a dagger and points it at Omri. Shortly afterwards, Omri's father comes in the room to help Omri get ready for school, forcing Omri to lock the cupboard and keep the Indian a secret. He discovers that putting stuff in there makes them real starting with Little Bear and Boone

When Omri arrives home from school, he is upset to discover that the Indian has returned to its original toy form. When he goes to bed, Omri once more hears the tapping noise he heard that morning. He opens the cupboard to find the Indian alive once more. The Indian is again initially frightened of Omri but warms up to him as the two begin talking, slowly forming a friendship. The Indian reveals himself as an English-speaking, 18th-century Iroquois Indian named Little Bear (Litefoot) who was fighting in the French and Indian War on the side of the British. During Little Bear's stay with Omri, Omri learns a lot about the Iroquois. Omri also learns that Little Bear has a deceased wife. Then Omri takes Little Bear outside but Little Bear gets hurt and then Omri has to get his brother's First World War British Army medic named Tommy Atkins (Steve Coogan), to treat Little Bear's wound.

Eventually, Omri reveals his secret to his friend Patrick who immediately wants to get in on the fun. Ignoring Omri's protests, Patrick brings to life a cowboy from 1879 called "Boohoo" Boone (David Keith). Boone and Little Bear are initially unfriendly towards one another, but are forced to behave themselves when Omri reluctantly agrees with Patrick to bring them to school. Their cover is nearly blown when Patrick almost shows Boone and Little Bear (now friends) to some classmates and he and Omri began arguing in the hallway.

Back home, Omri shows a female Indian figure to Little Bear which he intends to bring to life to give Little Bear a new wife. In the book she was called bright stars . Just as he is about to lock the figure in the cupboard, he and Patrick (who is spending the night) are puzzled to find the cupboard is missing. Omri's brother confesses he hid the cupboard in the downstairs closet as means of getting back at Omri for hiding the ball his brother keeps his pet rat in. When Omri retrieves the cupboard, he discovers that the key is gone.

That night, Omri and Patrick, along with Little Bear and Boone, watch a program on TV that shows a relentless slaughter of Indians by cowboys. Boone is enthusiastic at the sight of his 'boys' killing the helpless Indians while Little Bear watches in terror at the sight of his 'people' being massacred. Out of confusion and hearing Boone fire his revolver into the air with delightful cheering and applause, Little Bear fires an arrow into Boone's chest, knocking him unconscious. Making matters worse, Omri's mother warns that Omri's brother's pet rat has escaped and is hidden somewhere under the wooden floors.

Later that night, Omri and Patrick find the key jammed between two floor boards and accidentally push it down out of sight while trying to retrieve it. Little Bear goes under the floor and manages to return the key to Omri just before he is nearly killed by the pet rat. With the key back, Omri brings to life Tommy Atkins (Steve Coogan), a First World War British Army medic to treat Boone's wounds. While the still unconscious cowboy is being examined, Omri realizes it is time to return Little Bear and Boone to their respective time periods where they belong. Shortly after Omri locks Tommy Atkins back in the cupboard, Boone awakes and forgives Little Bear.

The next morning, Omri and Patrick say their goodbyes to their little friends before locking them back in the cupboard. Just before saying goodbye Omri has a vision of a life sized Little Bear telling him that when he returns to his real time he will take Omri on as his nephew. The film ends with Omri at school reading a journal entry where he assures everyone that although he will never know where or how Little Bear may be he does not worry about him anymore and knows deep down that Little Bear will continue to look after his people.

Special effects created the illusion of three-inch tall characters such as Little Bear, Boone, and Tommy the Medic. One scene had Boone being thrown from his horse and Boone falls to the floor but is captured in Omri's hands. Another has a teacher asking Patrick to show what he and Omri were quarreling about; Boone and Little Bear pose as inanimate toys on Patrick's hand so as not to give themselves away.

A mock up of a giant sneaker was used during a fight scene involving Little Bear and Boone. One early scene shows Little Bear cautiously walking onto Omri's hand and stand in (Christopher James), and the boy marvels at how "real" the Indian looks. The Chief was played by 75-year-old Ojibwe actor George Randall.

The pet rat that is owned by Omri's brother was created by Jim Henson's Creature Shop and operated by Julianne Buescher.

Rotten Tomatoes gives the film a score of 68% based on reviews from 19 critics..[3]

The movie debuted at number six.[4] The film made only $35 million against a production budget of $45 making it a box office bomb due to box office competition with Apollo 13, Nine Months, Pocahontas, and Batman Forever. [5] As a result, plans to adapt the next three books in the series into films were dropped.

Wikiquote has a collection of quotations from or about:
The Indian in the Cupboard (film)

Retrieved from "https://movies.fandom.com/wiki/The_Indian_in_the_Cupboard_(film)?oldid=301514"
Community content is available under CC-BY-SA unless otherwise noted.