Start a Wiki
watch 01:16
The Loop (Movies)
Do you like this video?
The Infiltrator 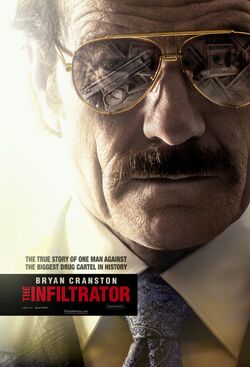 The Infiltrator is a 2016 American biographical crime drama film directed by Brad Furman and written by Ellen Brown Furman. The film is based on the eponymous autobiography by Robert Mazur, a U.S. Customs special agent, who in the 1980s helped bust Pablo Escobar's money-laundering organization by going undercover as a corrupt businessman. The film stars Bryan Cranston, Diane Kruger, Benjamin Bratt, John Leguizamo, Said Taghmaoui, Joseph Gilgun and Amy Ryan.

The project was first announced by The Hollywood Reporter on October 8, 2014, with Brad Furman as director and Bryan Cranston as Robert Mazur; Miriam Segal would produce the film for her Good Films banner along with George Films, while Relativity International was announced to sell the film to foreign distributors at the American Film Market. On February 13, 2015, Diane Kruger was set to star for the unspecified female lead role. Benjamin Bratt was set to star in the film as Roberto Alcaino, the agent's contact who dealt directly with cartel board members, including Escobar. On March 10, 2015, additional cast members were chosen, including John Leguizamo, Amy Ryan, Olympia Dukakis, Elena Anaya, and Juliet Aubrey. Broad Green Pictures acquired the US rights to the film on May 21, 2015.

Cranston and Leguizamo previously worked together in The Lincoln Lawyer, which Furman directed.

Filming was previously set to begin in March 2015 in Tampa, Florida, but then moved to London and Paris. According to SSN Insider, filming began on February 23, 2015. On March 11, 2015, the studio confirmed that filming was underway in London and released a first-look image from the film.

The production moved to Florida at the end of April; filming began in Tampa on April 22, 2015, on location at Port Tampa Bay. On April 28, 2015, they filmed in Parkland Estates, near the former home of Santo Trafficante, an infamous Tampa mob boss.

In the United States and Canada, The Infiltrator opened on Wednesday, July 13, 2016 and was projected to gross $5–8 million from 1,600 theaters in its opening five days.The film grossed $773,761 on its first day and $5.3 million in its opening weekend (a five-day total of $6.7 million), finishing eighth at the box office.

On Rotten Tomatoes, the film has an approval rating of 70% based on 171 reviews and an average rating of 6.4/10. The website's critical consensus reads, "The Infiltrator's compelling fact-based story and tremendously talented cast are often just enough to balance out its derivative narrative and occasionally clunky execution." On Metacritic, the film has a score of 66 out of 100, based on 38 critics, indicating "generally favorable reviews". Audiences polled by CinemaScore gave the film an average grade of "A–" on an A+ to F scale.

Retrieved from "https://movies.fandom.com/wiki/The_Infiltrator?oldid=155864"
Community content is available under CC-BY-SA unless otherwise noted.