Start a Wiki
watch 01:16
The Loop (Movies)
Do you like this video?
The Intern 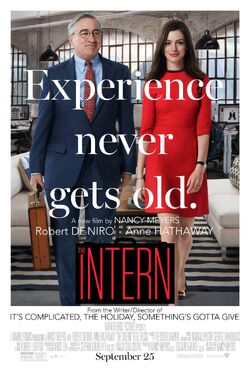 The Intern is currently scheduled for theatrical release on September 25, 2015.

70-year-old widower Ben Whittaker has discovered that retirement isn't all it's cracked up to be. Seizing an opportunity to get back in the game, he becomes a senior intern at an online fashion site, founded and run by Jules Ostin.[1]

Retrieved from "https://movies.fandom.com/wiki/The_Intern?oldid=101232"
Community content is available under CC-BY-SA unless otherwise noted.