Start a Wiki
watch 01:48
The Loop (Movies)
Do you like this video?
The Interview 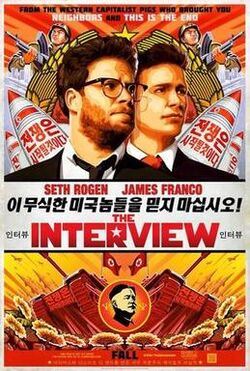 The Interview (2015) is an American comedy directed by Seth Rogen and Evan Goldberg, and written by Dan Sterling from a story by Rogen, Goldberg and Sterling. Starring Rogen and Franco, the film as journalists instructed to assassinate North Korean leader Kim Jong-un (played by Randall Park) after booking an interview with him.

Dave Skylark and producer Aaron Rapoport run the celebrity tabloid show "Skylark Tonight." When they land an interview with a surprise fan, North Korean dictator Kim Jong-un, they are recruited by the CIA to turn their trip to Pyongyang into an assassination mission.[1]

Retrieved from "https://movies.fandom.com/wiki/The_Interview?oldid=133168"
Community content is available under CC-BY-SA unless otherwise noted.