Start a Wiki
The Ipcress File 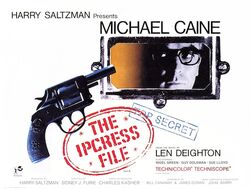 The Ipcress File is a 1965 British espionage film directed by Sidney J. Furie, starring Michael Caine and featuring Guy Doleman and Nigel Green. The screenplay by Bill Canaway and James Doran was based on Len Deighton's 1962 novel, The IPCRESS File. It has won critical acclaim and a BAFTA award for best British film. In 1999 it was included at number 59 on the BFI list of the 100 best British films of the 20th century.

A top scientist called Radcliffe is kidnapped and his security escort killed. Harry Palmer, a sergeant with a criminal past now working for a Ministry of Defence organisation, is summoned by his boss, Colonel Ross, and told that he is being transferred to a bureau headed by Major Dalby.

Ross suspects that Radcliffe's disappearance is part of a deliberate plot: sixteen top British scientists have inexplicably ceased to function, leaving their jobs at the peak of their careers. He tells Dalby that his position is precarious, and that Dalby's organisation will go if it can't get Radcliffe back. Palmer is then introduced as a replacement for the dead security escort.

At his first departmental meeting, Palmer befriends Jock Carswell. Dalby briefs his agents on the Radcliffe kidnapping, saying that they suspect Eric Ashley Grantby, codenamed "Bluejay", and his chief of staff, codenamed "Housemartin". Using a Scotland Yard contact, Palmer locates Grantby, who gives him a contact number. It doesn't work when Palmer rings it, but when he tries to stop Grantby, Housemartin attacks him and the two get away.

Later, Carswell and Palmer learn that Housemartin has been arrested, but by the time they reach the police station, they find that men impersonating them have killed him. Suspecting that Radcliffe may be being held in a disused factory near where Housemartin was picked up, Palmer orders a search, but they find only a piece of audiotape marked 'IPCRESS' that produces a meaningless noise when played.

When contact with Grantby is re-established, a deal struck for Radcliffe's safe return. The exchange goes as planned, but as they are leaving, Palmer sees a man in the shadows and shoots him. It turns out to be a CIA agent who has also been following Grantby. Palmer is subsequently followed by another CIA operative, who threatens to kill him if he discovers that the death was not a mistake.

Some days later, it becomes clear that while Radcliffe is physically unharmed, his mind has been affected and he can no longer function as a scientist. Carswell discovers a book titled "Induction of Psychoneuroses by Conditioned Reflex under Stress": IPCRESS, which he believes explains what has happened to Radcliffe and the other scientists. Carswell borrows Palmer's car to test his theory on Radcliffe, but is killed before reaching him.

Palmer believes that he must have been the intended target. He goes home to collect his belongings and there discovers the body of the second CIA agent. Returning to the office, he finds that the IPCRESS file is missing from his desk. Certain that he is being set up, he tells Dalby what has happened and that he suspects Ross took the file, revealing that Ross had previously asked him to microfilm it. Dalby tells him to leave town for a while.

On the train to Paris, Palmer is kidnapped and wakes up imprisoned in a cell. After several days denied sleep, food and warmth, Grantby reveals himself as Palmer's kidnapper and tells him that he has been taken to Albania. Having read the file, Palmer realises that their treatment of him is part of the conditioning for the brainwashing procedures to come. During it, he uses pain to distract himself and proves to be unusually resistant. However, after many sessions inducing stress through electronic sounds and disorientating images, he succumbs. Grantby then instills a trigger phrase that will make Palmer follow any commands given to him.

Palmer eventually manages to escape and, on reaching the street, realises he is still in London. He phones Dalby, who is in Grantby’s company at the time. Dalby uses the trigger phrase and gets Palmer to call Ross to the warehouse. As Dalby and Ross arrive, Palmer holds them at gunpoint. Dalby accuses Ross of killing Carswell; Ross tells Palmer that he had been investigating Dalby, whom he already suspected. Dalby uses the trigger phrase again and commands him to ‘Kill the traitor now’. At this point, Palmer strikes his wavering hand against a piece of metal and the pain reminds him of his conditioning. Dalby goes for his gun and Palmer shoots him. When Palmer reproaches Ross for endangering him in that way, he is told that it’s his job.

Production and contrast with Bond franchiseEdit

The film was intended as an ironically downbeat alternative portrait of the world of spies portrayed in the successful and popular James Bond films - even though one of the producers and others in the production team were in fact also responsible for the latter franchise. In contrast to Bond's public school background and playboy lifestyle, Palmer is a Cockney who lives in a Notting Hill flat and has to put up with red tape and inter-departmental rivalries. When appointed to a new post, one of his first questions is whether he will get a pay rise. (Bond's salary is hardly mentioned and he only goes to the best hotels, often using the Presidential suite.) The action is set entirely in "a gritty, gloomy, decidedly non-swinging" London with humdrum locations.[3] And although Palmer is, like Bond, a gourmet, he shops in a supermarket.

In this respect, it is a tribute to the complexity and flexibility of the mind of Harry Saltzman, who was an acknowledged master of proposing "bigger and more extravagant ideas" for Bond films according to the MGM Home Entertainment documentary Harry Saltzman: Showman. Five prominent members of the production team - producer Harry Saltzman, executive producer- Charles Kasher (who also produced the sequel-"Funeral In Berlin", film editor Peter R. Hunt, composer John Barry (who produced a distinctive and innovative score) and production designer Ken Adam - also worked on the James Bond film series, and projects like this ultimately led to Saltzman's departure from Eon Productions and his sale of Danjaq, LLC to United Artists in 1975.

Harry Saltzman gave Jimmy Sangster a copy of the novel to read. Sangster enjoyed the book and was eager to adapt the novel, and suggested Michael Caine play the role and Sidney J. Furie direct. However, Saltzman would not commit to a timeframe which Sangster insisted upon. Ken Hughes wrote a script which Saltzman rejected.

The only major main line railway route to be closed by Dr Beeching is referenced. The soon to be abducted scientist is seen boarding a train at Marylebone Station and the station announcer calls for passengers for the train to "Rugby, Leicester, Nottingham, Sheffield", the doomed route of the Great Central Main Line.

When the film premiered at the Leicester Square Theatre in London on 18 March 1965, the film critic for The Times had mixed feeling about it. While enjoying the first part of the film, and generally praising Michael Caine, the critic found the second half bewildering to the extent that the characters "cease to be pleasantly mystifying and become just irritatingly obscure."

The film is included on the British Film Institute's BFI 100, a list of 100 of the best British films of the 20th century, at No. 59, and currently holds a "Fresh" rating of 100% at Rotten Tomatoes.

The film was entered into the 1965 Cannes Film Festival, and was nominated for the Palme d'Or award.

Retrieved from "https://movies.fandom.com/wiki/The_Ipcress_File?oldid=74451"
Community content is available under CC-BY-SA unless otherwise noted.