watch 00:59
The Loop (Movies)
Do you like this video?
The Karate Kid 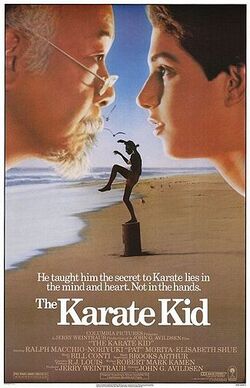 The Karate Kid is a 1984 American martial arts romantic drama film directed by John G. Avildsen and written by Robert Mark Kamen, starring Ralph Macchio, Pat Morita and Elisabeth Shue. It is an underdog story in the mold of a previous success, Avildsen's 1976 film Rocky. It was a commercial success upon release, and garnered favorable critical acclaim, earning Morita an Academy Award nomination for Best Supporting Actor.

Daniel befriends Ali Mills (Elisabeth Shue), an attractive high school cheerleader, at the same time angering her arrogant ex-boyfriend, Johnny Lawrence (William Zabka). Johnny is the best student at the Cobra Kai dojo, where he is taught an unethical, vicious form of martial arts. Daniel knows a little karate from books and a few classes at the YMCA, but Johnny easily defeats him in their first encounter. Thereafter, Johnny and his gang of Cobra Kai students torment Daniel at every opportunity.

When Mr. Miyagi sees the gang giving Daniel a savage beating, he intervenes and single-handedly defeats five attackers with ease. Awed, Daniel asks Mr. Miyagi to be his teacher. Mr. Miyagi refuses, but agrees to go with Daniel to the Cobra Kai dojo in order to resolve the conflict. They meet with the sensei, John Kreese (Martin Kove), an ex-Special Forces Vietnam veteran who sneers at the concepts of mercy and restraint. Kreese and Mr. Miyagi agree to a match between Johnny and Daniel in two months' time at the "All Valley Under 18 Karate Tournament," where Johnny is the defending champion, and the Cobra Kai students can fight Daniel on equal terms. Mr. Miyagi also requests that the bullying stop while Daniel trains. Kreese orders his students to leave Daniel alone, but warns that if Daniel does not show up for the tournament, the harassment will resume and Miyagi himself will also become a target.

Mr. Miyagi becomes Daniel's teacher and, slowly, a surrogate father figure. He begins Daniel's training by having him perform menial tasks such as waxing cars, sanding a wooden floor, and painting a fence and Mr. Miyagi's house. Each chore is accompanied with specific movements involving clockwise/counter-clockwise and up-and-down hand motions. Daniel fails to see any connection to his training and these chores and eventually feels frustrated, believing he has learned nothing of karate. When he expresses his frustration, Mr. Miyagi shows how while doing these chores Daniel has been learning defensive blocks through muscle memory.

As Daniel's training continues more overtly, his bond with Mr. Miyagi becomes closer. He learns that Mr. Miyagi lost his wife and son in childbirth at Manzanar internment camp while he was serving overseas with the United States Army during World War II. The loss of his family and Daniel's loss of his father further strengthen the father-son surrogacy. Daniel also discovers that the outwardly peaceful and serene Miyagi received the Medal of Honor for valor against German forces in Europe. Through Mr. Miyagi's teaching, Daniel learns not only karate but also important life lessons such as the importance of personal balance, reflected in the belief that martial arts training is as much about training the spirit as the body. Daniel applies the life lessons that Mr. Miyagi has taught him to strengthen his relationship with Ali.

At the tournament, Daniel surprises everyone by reaching the semi-finals. Johnny advances to the finals, scoring three unanswered points against a highly skilled opponent. Kreese instructs Bobby Brown, one of his more compassionate students and the least vicious of Daniel's tormentors, to disable Daniel with an illegal attack to the knee. Bobby reluctantly does so, severely injuring Daniel and getting disqualified in the process. Daniel is taken to the locker room and checked out, with the physician determining that he cannot continue, but Daniel believes that if he does not continue, his tormentors will have gotten the best of him. He gets Miyagi to use a pain suppression technique to allow him to finish the tournament. As Johnny is about to be declared the winner by default, Daniel hobbles into the ring. The championship final is a seesaw battle, as neither Johnny nor Daniel is able to break through the other's defenses.

Daniel successfully uses a scissor leg technique, tripping Johnny and delivering a blow to the back of the head, giving Johnny a nose bleed. The match is paused for Johnny to be looked at by Kreese. Kreese directs Johnny to sweep Daniel's injured leg, an unethical move. Johnny looks horrified at the order but reluctantly agrees after Kreese's intimidation. Despite the moves, Daniel gets up each time.

Eventually, Daniel and Johnny are tied, with the next point deciding victory. Daniel tries to kick Johnny with his injured leg but Johnny grabs it and delivers illegal contact to Daniel's injured knee. Daniel, barely able to stand, assumes the "Crane" stance, a technique he observed Mr. Miyagi performing on the beach during his training. After the referee signals to begin, Johnny lunges in. Daniel jumps in the air and delivers a front kick to Johnny's chin, winning the tournament.

Johnny, having gained newfound respect for his adversary, takes Daniel's trophy from the Master of Ceremonies and presents it to Daniel himself, sincerely proclaiming "You're all right, LaRusso! Good match!" Mr. Miyagi, Ali, and Daniel's mother look on admiringly as Daniel celebrates his victory.

Chuck Norris allegedly turned down the role of John Kreese, because he did not want to portray a character that reinforced a negative stereotype of martial arts. Norris disputed this story during a February 9, 2006 appearance on The Adam Carolla Show, Norris insisted that he was not offered the role, and that he was already acting in leading roles at that time anyway. Additionally, according to the special edition DVD commentary, the studio originally wanted the role of Mr. Miyagi to be played by Toshiro Mifune, but writer Robert Mark Kamen was opposed to that casting choice. Mako was also considered for the role of Mr. Miyagi, but was not available due to prior commitments to film Conan the Destroyer, though he would eventually play a similar role in the film Sidekicks.

The soundtrack album (containing songs from the film) was released on Casablanca Records. Of particular note is Joe Esposito's "You're the Best", featured during the tournament montage near the end of the first film. Bananarama's 1984 hit song "Cruel Summer" also made its first U.S. appearance in the movie but was excluded from the film's soundtrack album. Other songs featured in the film were left off the album, including "Please Answer Me", performed by Broken Edge, and "The Ride" performed by The Matches. "The Ride" has never been released on any album, but was made available on iTunes, Amazon.com and Rhapsody in April 2009 for the film's 25th anniversary.

Retrieved from "https://movies.fandom.com/wiki/The_Karate_Kid_(1984)?oldid=186722"
Community content is available under CC-BY-SA unless otherwise noted.