watch 00:59
The Loop (Movies)
Do you like this video?
The King's Speech 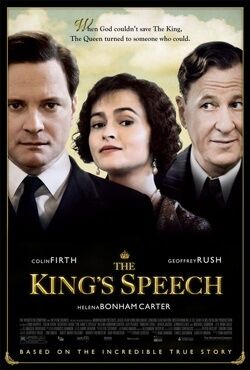 When God couldn't save the King, the Queen turned to someone who could
Directed By
Tom Hooper
Produced By
Lain Canning
Written By
David Seidler
Cast
Colin Firth, Geoffrey Rush, Helena Bonham Carter
Distributed By

The King's Speech is a 2010 historical drama directed by Tom Hooper and written by David Seidler which won four Oscars and was nominated for an additional eight. Colin Firth plays King George VI who, to cope with a stammer, sees Lionel Logue, an Australian speech therapist played by Geoffrey Rush. The men become friends as they work together, and after his brother abdicates the throne, the new King relies on Logue to help him make a radio broadcast on Britain's declaration of war on Germany in 1939.

Retrieved from "https://movies.fandom.com/wiki/The_King%27s_Speech?oldid=263294"
Community content is available under CC-BY-SA unless otherwise noted.