Start a Wiki
The Last Sharknado: It's About Time 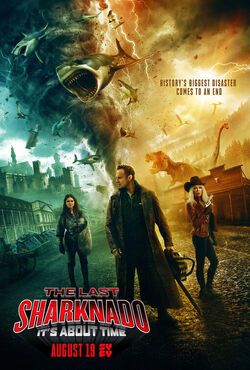 The Last Sharknado: It's About Time is a 2018 American made-for-television sci-fi comedy disaster film directed by Anthony C. Ferrante. The cast of the film consists of Ian Ziering, Tara Reid, Cassie Scerbo, Judah Friedlander, and Vivica A. Fox. The film serves as a sequel to Sharknado, Sharknado 2: The Second One, Sharknado 3: Oh Hell No!, Sharknado: The 4th Awakens, and Sharknado 5: Global Swarming, and is the final installment in the series.

Immediately following the events of the previous film, with the Earth completely devastated from the global sharknado swarm, Fin and his now-adult son Gil travel back 66 million years to the Cretaceous in order to prevent the first sharknado and destroy the phenomena once and for all. Shortly after arriving, Gil vanishes; Fin learns from a message recorded by Gil earlier that due to the instability of the energy needed to time travel, any individual person can only travel back in time once, with any subsequent trips resulting in their disappearance. Fin retrieves the bag containing April's cybernetic head from a dinosaur with aid from Nova, and they are joined by pre-cyborg April and Bryan, all three of whom were saved by Gil removing them from the times of their original deaths. As they begin to lay out their plan, the very first sharknado appears in conjunction with a meteor shower. Fin then plans to use the meteorites' heat to blow up the sharknado. The gang then approaches the sharknado on a pterodactylus and Fin jumps down onto a shark and tries to navigate it to consume meteorite fragments. As they execute the plan, they see the past version of Gil riding a dinosaur inside the sharknado before he disappears into the future. Eventually, Fin knocks the shark into the sharknado before it explodes and dissipates the storm. Believing they have changed history to erase the sharknado phenomenon, the group use a capacitor built into Gil's flight insignia to try to travel back to the present day.

However, Fin and company instead arrive in medieval Camelot, with Bryan turned into a woman due to a temporal alteration. They encounter Morgana le Fay and are brought before Merlin, discovering Gil's research on the Einstein-Rosen bridge to create a method of time travel. Furthermore, Gil's time traveling has altered space-time, unleashing the sharknados throughout history as he searches for his parents. April also learns of her future when Fin accidentally drops the bag with Robot April's head and the others discover its contents, apologizing for keeping April in the dark to spare her from knowing her fate. She accepts Fin’s apology, but just as they reconnect, another sharknado forms and heads straight to the castle. The Gil of the past uses the sharknado to travel into the future, and Fin decides to use Excalibur to defeat the sharknado, with Morgana killed by one of the sharks. The group then travel to the Revolutionary War where they meet Benjamin Franklin and George Washington, with Bryan (who returned to original form) convincing them to let them use their cannons to destroy the sharknado that threatens the Revolutionary Army's fleet. They succeed, with Bryan remaining behind as the others continue.

Ending up in the Wild West, the group unwittingly allows Billy the Kid to escape capture when they arrive, resulting in Fin's arrest by the local sheriff while April and Nova hide. However, as Billy was Gil's escape route to the next sharknado, this threatens to severely alter the timeline. Nova and April are rescued by Skye, who was also saved by Gil before being sent back to the Wild West. Skye helps April and Nova save Fin and Gil, with Skye establishing a bootstrap paradox by telling Gil to save her future self. Realizing that they can do nothing that would interfere with Gil's journey through time in search of his parents, the group allow him to make a time leap using the sharknado before destroying it with Robot April's eye lasers. The group then use a train to create the next time portal, ending up at a beach in the 1950s as a sharknado is forming. Fin encounters younger versions of his parents Gilbert and Raye, who have been enlisted by Gil to help create the time capacitor. After Gil makes his time leap by entering the sharknado on a surfboard, the group nullifies it using a ray gun created by him and his grandparents. The group tries to follow Gil to July 11, 2013 to stop the sharknado from the first film, but Nova sabotages the capacitor to travel to 1997 instead, where she attempts to save her grandfather from being killed in the shark attack that traumatized her as a child. Despite Fin's warnings against altering her personal timeline to such a degree, Nova rescues her grandfather only to be eaten in the shark attack herself. April is killed as well, while Robot April's head is lost in the ocean.

Devastated, Fin and Skye decide to continue on and use a shark to attempt another jump to 2013. However, they instead end up in the far future of the year 20013, where they find that Robot April has taken over the ruined world left by the global sharknado using an army of her clones and flying, robotic sharks. She explains that after her head was found by a fishing boat, she felt abandoned and spent the next 20,000 years developing a stable time machine, which she used to force Fin into her future so they could be together forever. Robot April freezes Skye in carbonite and tries to convince Fin to stay with her using her clones of their children and Nova, but Fin refuses, prompting her to torture him with electricity until the human April, who Robot April revived and preserved to act as a genetic base for the clones, wakes up and intervenes. While the two Aprils fight each other, Fin uses the time machine to reach 2013, where he lands on Captain Santiago's boat right as the true first sharknado forms. Fin finds that Santiago's crew has found Robot April's head, and intervenes to change history and prevent her from becoming evil. Fin and Santiago battle the sharks while Robot April's head recharges her eye lasers in order to destroy the sharknado. However, the Robot April of the future (disguised as Gil) arrives, and her struggle with Fin inside the sharknado damages the capacitor, tearing the fabric of reality. Time begins collapsing, creating a "timenado" in which figures from throughout history such as Cleopatra and Adolf Hitler pass through the vortex as it destroys the universe. The present-day Robot April's head helps Fin finally destroy her future self, and he triggers her nuclear reset failsafe, sacrificing themselves in order to destroy the sharknado and stitch time back together, resulting in the creation of a new timeline.

In the new, sharknado-free timeline, all of the Shepard family and friends are alive. Fin and April run the bar from the first film with Nova, who now likes sharks. April is pregnant with Gil. A television commercial reveals that Skye has become a politician and is a leading presidential candidate. Fin's daughter Claudia delivers Fin a letter from his father, who is in space and has sent his flight insignia as a gift for Gil's birth. Fin, who plans to retire to Kansas with April and Gil, delivers an emotional farewell speech to his friends and family. April goes into labor, and everyone rushes out of the bar to head to the hospital. As they leave, the television plays a broadcast of The Today Show with Al Roker reporting that there are no clouds in the sky at all, an occurrence that will likely never happen again.

Retrieved from "https://movies.fandom.com/wiki/The_Last_Sharknado:_It%27s_About_Time?oldid=176944"
Community content is available under CC-BY-SA unless otherwise noted.