Start a Wiki
watch 01:27
The Loop (Movies)
Do you like this video?
The Laundromat 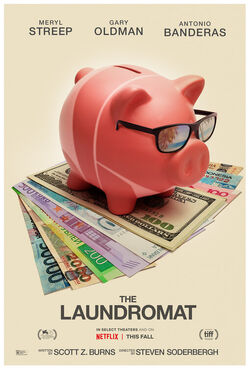 It premiered at the Venice International Film Festival on September 1, 2019. It was released in the United States theatrically on September 27, 2019 and will be available to stream digitally on Netflix on October 18, 2019.

The film follows Ellen Martin (Streep), whose dream vacation takes a wrong turn and leads her down a rabbit hole of shady dealings that can all be traced to one Panama City law firm, run by seductive partners Jürgen Mossack (Oldman) and Ramón Fonseca (Banderas). She soon learns that her minor predicament is only a drop in the bucket of millions of files linking an off-shore tax scheme to the world's richest and most powerful political leaders.

Retrieved from "https://movies.fandom.com/wiki/The_Laundromat?oldid=186439"
Community content is available under CC-BY-SA unless otherwise noted.