watch 01:56
The Loop (Movies)
Do you like this video?
Play Sound
The Legacy of a Whitetail Deer Hunter 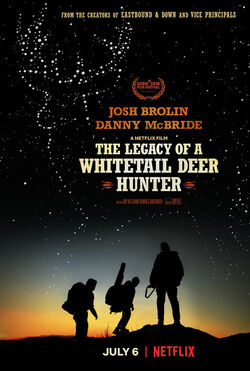 The Legacy of a Whitetail Deer Hunter is a 2018 American comedy film directed by Jody Hill. The cast of the film consists of Josh Brolin, Montana Jordan, and Danny McBride.

The great hunter Buck Ferguson and his trusted cameraman Don set out for an epic weekend adventure to reconnect with Buck's young son.

Retrieved from "https://movies.fandom.com/wiki/The_Legacy_of_a_Whitetail_Deer_Hunter?oldid=176709"
Community content is available under CC-BY-SA unless otherwise noted.