View src
watch 01:33
House of the Dragon Trailer - The Loop
Do you like this video?
Play Sound
The Lego Movie 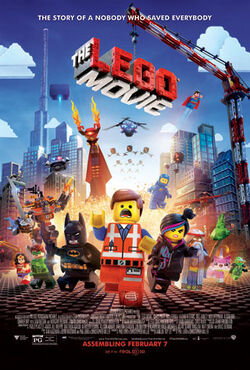 The Lego Movie is a 2014 live action/computer-animated adventure comedy film directed and co-written by Phil Lord and Chris Miller, distributed by Warner Bros. Pictures, and featuring the voices of Chris Pratt, Will Ferrell, Elizabeth Banks, Will Arnett, Nick Offerman, Alison Brie, Charlie Day with Liam Neeson and Morgan Freeman. Based mainly on the Lego line of construction toys, the film tells the story of an ordinary Lego minifigure named Emmet prophesied to save the Lego universe from the tyrannical Lord Business.

The film was released theatrically on February 7, 2014. It was a critical and commercial success, with many critics highlighting its visual style, humor, voice acting and heartwarming message. It earned more than $254 million in North America and $206 million internationally for a worldwide total of over $468 million, becoming the most commercially successful animated film produced and distributed by Warner Bros. Pictures to date.

At the 41st Saturn Awards, the film was nominated for Best Animated Film. Three sequels and spin-offs were also released: The Lego Batman Movie, The Lego Ninjago Movie and The Lego Movie 2: The Second Part.

The wizard Vitruvius (Morgan Freeman) attempts to protect a superweapon called the "Kragle" from the evil Lord Business (Will Ferrell). He fails to do so and its blinded. He prophesies that a person called "the Special" will find the Piece of Resistance capable of stopping the Kragle.

Eight and a half years later, an ordinary construction worker named Emmet Brickowski (Chris Pratt) comes across a woman named Lucy (alias Wyldstyle) (Elizabeth Banks), who searches for something after hours at Emmet's construction site. When he investigates, Emmet falls into a hole and finds the Piece of Resistance. Compelled to touch it, Emmet experiences vivid visions and passes out. He awakens in the custody of Bad Cop (Liam Neeson), Business' lieutenant, with the Piece of Resistance attached to his back. There, Emmet learns of Business' plans to freeze the world with the Kragle, revealed to be a tube of Krazy Glue with the label partially rubbed out. Wyldstyle rescues Emmet and takes him to meet Vitruvius in The Old West, explaining that she and the wizard are Master Builders capable of building anything they need without instruction manuals. She further explains Business' disapproval of such anarchic creativity, for which most of them are incarcerated. Though disappointed to find Emmet displays no creativity, Wyldstyle and Vitruvius are convinced of his potential when he recalls visions of a humanoid deity called "The Man Upstairs".

Bad Cop tracks down Emmet, Wyldstyle, and Vitruvius. They are rescued by Wyldstyle's boyfriend Batman and taken to Cloud Cuckoo Land, home of Unikitty (Alison Brie) where a council of the remaining Master Builders, who are unimpressed with Emmet and refuse to fight Business. Due to unspotted tracking device, Bad Cop and his forces attack and capture all the Master Builders except for Emmet, Wyldstyle, Vitruvius, Batman, Unikitty and the spaceman named Benny (Charlie Day) who escaped in quickly-built submarine. After the submarine is wrecked, they are rescued by Metal Beard (Nick Offerman). Emmet believes the Master Builders' weakness is that their individual creativity prevents them from working together. He devises a team plan to infiltrate Business' headquarters, but he and his allies are captured and imprisoned, while Vitruvius is decapitated by Lord Business with a penny. With his dying words, Vitruvius reveals he made up the prophecy. Business throws the Piece of Resistance off the edge of the universe, sets his headquarters to self-destruct, and leaves the Master Builders and Bad Cop to die. Vitruvius' ghost appears before Emmet and explains it was not the prophecy, but his self-belief that made him the Special. Tied to the self-destruct mechanism's battery, Emmet flings himself off the edge of the universe to save his friends, who escape further danger with the aid of Bad Cop. Inspired by Emmet's sacrifice, Wyldstyle rallies the Lego people across the universe to use whatever creativity they have to build machines and weapons to fight Business' forces, with the Master Builders leading the charge.

Emmet finds himself in the real world, where the events of the story are being played out within the imagination of a boy, Finn (Jadon Sand), on his father's Lego set in a basement. The father—revealed as "The Man Upstairs" (Will Ferrell) and Finn's inspiration for Business—chastises his son for ruining the set by creating hodgepodges of different characters and playsets, and proceeds to permanently glue his perceived perfect creations together. Realizing the danger his friends are in, Emmet wills himself to move and gains Finn's attention. Finn returns Emmet and the Piece of Resistance and fights his way onto Lord Business' ship. In the real world, Finn's father looks at his son's creations again and is impressed. Realizing Finn based the villainous Lord Business on him, the father has a change of heart and allows his son to play with his Lego however he sees fit. In the Lego world, Emmet tells Business that he, too, is special, as is everyone. Moved by Emmet's speech, Business caps the Kragle with the Piece of Resistance and unglues his victims with mineral spirits. As Emmet celebrates with his friends and his girlfriend Wyldstyle (Revealing his name as Lucy), aliens from planet Duplo beings beam down and announce their invasion as a result of the father allowing Finn's younger sister to play with his Lego sets as well.

In addition, Anthony Daniels and Billy Dee Williams reprise their Star Wars roles as C-3PO and Lando Calrissian respectively, with Keith Ferguson voicing Han Solo (whom he previously voiced in Robot Chicken and Mad). Shaquille O'Neal portrays a Lego version of himself who is a Master Builder alongside two generic members of the 2002 NBA All-Stars.

The cast is rounded out by Craig Berry as Blake; David Burrows as an Octan Corporation Robo Fed; Amanda Farinos as Finn's mother (an offscreen character); Will Forte as Abraham Lincoln (a Master Builder); Dave Franco as Wally (a construction worker); Todd Hansen as Gandalf (a Master Builder whom Vitruvius mistakes for Albus Dumbledore); Jake Johnson as Barry (a construction worker); Keegan-Michael Key as Frank the Foreman (a construction foreman who is Emmet's boss); Kelly Lafferty as Velma Staplebot (Lord Business' assistant); Chris McKay as Larry the Barista (a man who works at a coffee shop in Bricksburg); Graham Miller as the Duplo alien leader; Doug Nicholas as Surfer Dave (one of Emmett's neighbors) and a Micro Manager; Chris Paluszek as a Robo Foreman (the head of the Robo Demolitionists and the Robo Workers); Chris Romano as Joe (a plumber in Bricksburg), Melissa Sturm as Ma Cop (a police officer who is Bad Cop/Good Cop's mother) and Gail (a construction worker); Jorma Taccone as William Shakespeare (a Master Builder); and Leiki Veskimets as the voice of Octan Tower's Central Computer.

Co-director Chris Miller cameos as a TV presenter in the studio that films the Where Are My Pants TV series.

The Lego Movie received universal acclaim with reviewers highlighting the film's story, visuals, music, humour, voice-acting and heart-warming message. It holds a rating of 96% on Rotten Tomatoes with an average rating of 8.1/10 based on 200 reviews. The website's consensus reads, "Boasting beautiful animation, a charming voice cast, laugh-a-minute gags, and a surprisingly thoughtful story, The Lego Movie is colorful fun for all ages." On Metacritic, which assigns a normalized rating out of 100 based on reviews from critics, the film has a score of 82 (indicating "universal acclaim") based on 42 reviews. According to CinemaScore polls conducted during the opening weekend, the average grade cinemagoers gave The Lego Movie was A on an A+ to F scale. Filmmaker Edgar Wright and TIME Magazine film critic Richard Corliss have respectively named The Lego Movie as one of their favorite films of 2014.