The Lego Movie 2: The Second Part

Edit
watch 01:23
Wiki Targeted (Entertainment)
Do you like this video?
Play Sound
The Lego Movie 2: The Second Part 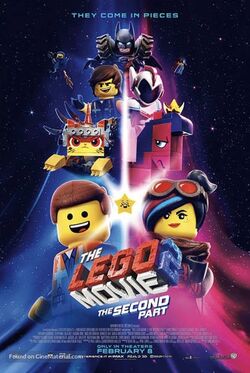 The film was released in Denmark on February 7, 2019, and was released the following day in the United States by Warner Bros. Pictures.

In the five years since the events of the first film, Finn's younger sister Bianca has started taking some of his LEGO creations and other toys from the sets in their basement along with her own set of Duplo bricks to play with in her own room. Metaphorically, in the LEGO universe, the Duplo invaders have turned Bricksburg into a post-apocalyptic wasteland named Apocalypseburg, and continue to invade periodically. The ordeal has made most of Apocalypseburg's citizens hardened, but Emmet remains upbeat, wanting to move into a dream home with Lucy. However, Emmet is troubled by dreams of a pending "Our-Mom-Ageddon".

General Sweet Mayhem, the leader of the Duplo army, arrives in Apocalypseburg and announced that Queen Watevra Wa'Nabi of the Systar System intends to wed Batman. Mayhem's forces kidnap Batman, Lucy, Benny, Metalbeard, and Unikitty, taking them to the Systar system. There, Batman is taken to Wa'Nabi where he eventually finds that the Queen helps satisfy his emotional validation, and proposes marriage. The others are placed in environments design to tempt them. The others each fall for these temptations, but Lucy refuses to accept hers, an endless attempt to brainwash her with catchy pop music.

Emmet converts his dream house to a spaceship to give pursuit. En route, he is saved from colliding with an asteroid field by the rugged adventurer Rex Dangervest. As they continue on to the Systar system, Emmet begins to take on several of Rex's mannerism, hoping to impress Lucy. When they arrive, they evade capture by Wa'Nabi's forces and join with Lucy. Rex helps them come up with a plan to rescue their friends which involves switching off the pop music that is brainwashing the others, while Emmet will destroy the reception cake encased in a temple to stop the wedding. As Lucy fights Mayhem to get to the music, she learns that the Systar System never meant to be antagonistic to Apocalypseburg, but instead were trying to establish peace between them, and simply failed at communicating this well. Lucy tries to stop Emmet from destroying the temple, but Emmet, facilitated by Rex's manipulations, destroys the temple anyway. This creates a hole in the LEGO universe, and Wa'Nabi warns them all the Our-Mom-Ageddon is upon them all.

In the real world, the act of destroying the temple is represented by Finn angrily destroying Bianca's LEGO creations. Hearing them bicker, their mother gets furious and orders them to put the LEGOs into storage. Emmet tries to stop them but is prevented by Rex, who reveals he is a embittered version of himself from the future. After being neglected for years after crashing underneath the dryer, he intends to deliberately bring upon the Our-Mom-Ageddon, for the rest of the LEGO universe to know how he once felt. When Emmet fights back, Rex knocks him under the dryer to ensure that he will exist. Lucy rallies the others into escaping from the storage bin, and brings them back into the LEGO world. Emmet and Lucy overpower Rex and destroy his time machine. Realizing that Emmet being saved by Lucy in their bout means he won't end up becoming him, Rex, and therefore his timeline, is erased.

Wa'Nabi and Batman finally wed, represented by Finn and Bianca reconciling with each other and agreeing to play together again. Their mother returns their toys, averting Our-Mom-Ageddon. The LEGO universe is transformed into a mishmash of Apocalypseburg and the Systar System called "Systocalypstar" which is peaceful. Emmet rebuilds his home with Lucy, who reveals she was the original artist of "Everything is Awesome".