Start a Wiki
The Life Aquatic with Steve Zissou 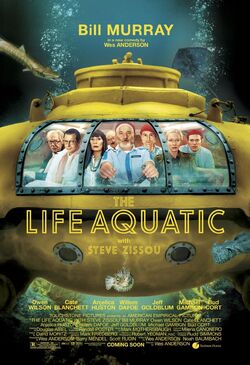 The Life Aquatic with Steve Zissou is a 2004 American comedy-drama film, directed and co-written by Wes Anderson and starring Bill Murray.

The film stars Murray as an eccentric oceanographer who sets out to exact revenge on a "Jaguar shark" that ate his partner. The film is both a parody of and homage to French oceanographer Jacques Cousteau, to whom the film is dedicated.

When his partner is killed by the mysterious and possibly nonexistent Jaguar Shark, Steve Zissou and his Team Zissou crew set off for an expedition to hunt down the creature. Along with his estranged wife, a beautiful journalist and a co-pilot who could possibly be Zissou's son, the crew set off for one wild expedition.

Retrieved from "https://movies.fandom.com/wiki/The_Life_Aquatic_with_Steve_Zissou?oldid=119142"
Community content is available under CC-BY-SA unless otherwise noted.