Start a Wiki
watch 01:48
The Loop (Movies)
Do you like this video?
The Lincoln Lawyer 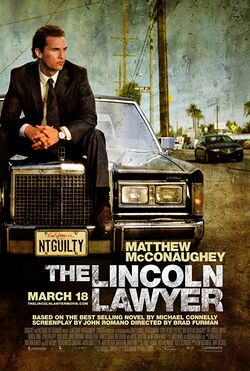 The Lincoln Lawyer is a 2011 American neo noir legal thriller film adapted from the 2005 novel of the same name by Michael Connelly. The film is directed by Brad Furman, with a screenplay written by John Romano, and stars Matthew McConaughey as the titular lawyer, Mickey Haller. The film co-stars Ryan Phillippe, Marisa Tomei, and Josh Lucas, and features William H. Macy and Bryan Cranston in supporting roles.

The story is adapted from the first of several novels featuring the character of Mickey Haller, who works out of a chauffeur-driven Lincoln Town Car rather than an office. Haller is hired to defend the son of a wealthy Los Angeles businesswoman in an assault case. Details of the crime bring up uncomfortable parallels with a former case, and Haller discovers the two cases are intertwined.

A high-profile case comes his way and Haller is hired to represent wealthy Louis Roulet (Ryan Phillippe), a Beverly Hills playboy and son of real estate mogul Mary Windsor (Frances Fisher). Roulet is accused of brutally beating prostitute Regina Campo (Margarita Levieva). Roulet insists he is the innocent victim of a setup. Haller and his investigator, Frank Levin (William H. Macy) analyze photos and evidence and find it similar to one of Haller's past cases that resulted in a life sentence for his client, Jesus Martinez (Michael Peña), for murdering a woman, despite his repeatedly proclaiming his innocence.

Haller's ex-wife, prosecutor Maggie McPherson (Marisa Tomei), has never appreciated Haller representing guilty clients, though they remain close. Haller wonders if he should have done more for Martinez rather than persuading him to plead guilty to avoid the death penalty. Haller visits the prison, where Martinez becomes agitated when Haller shows him Roulet's photo. Haller now believes Roulet is the killer in the Martinez case, but, bound by attorney–client confidentiality rules, is unable to reveal what he knows.

Roulet breaks into Haller's house and nonchalantly admits to committing the murder for which Martinez was convicted. He makes veiled threats toward Haller's ex-wife and their daughter. Levin is found shot to death after leaving Haller a voicemail message claiming that he found Martinez's "ticket out of jail." Levin was shot with a .22 caliber pistol, and Haller discovers that his late father's .22 Colt Woodsman is missing from its box.

Detective Lankford (Bryan Cranston), who dislikes Haller, discovers the gun's registration and suspects Haller's involvement in Levin's murder. Haller is certain that Roulet stole the weapon when he broke into Haller's home.

Obliged to do his best for his client, guilty or not, Haller ruthlessly cross-examines Campo and discredits her in the jury's eyes. Haller then sets up a known prison informant with information on the previous murder. When the informant testifies, Haller discredits him, and the state's attorney (Josh Lucas) can only move to dismiss all charges. Roulet is set free, to his mother's delight, but the police arrest him immediately for the previous murder, based upon testimony Haller coaxed from the informant.

Haller acquires a pistol from his driver, Earl, for protection. Roulet is released due to lack of evidence and intends to kill Haller's ex-wife and daughter. Haller is waiting at Maggie's house when Roulet arrives. He mockingly tells Haller that he cannot guard his family all the time. The bikers whom Haller previously represented suddenly arrive and brutally beat Roulet.

Maggie discovers that Levin had found a parking ticket that was issued to Roulet near the previous murder victim's house. It is strong evidence against Roulet in his pending murder trial and will support Martinez's innocence. Upon arriving home, Haller discovers Roulet's mother, Mary Windsor, waiting inside. She shoots him with the Colt Woodsman, confessing that she murdered Levin to protect her son. A wounded Haller shoots her.

When Haller is released from the hospital, he learns that Martinez has been released, and that the District Attorney will seek the death penalty against Roulet. As Haller rides off to his next case, he is pulled over by Vogel and the biker gang, whose next case he takes pro bono due to their previous help.

After watching a rough cut of the film on November 12, 2010, Michael Connelly, author of the book The Lincoln Lawyer, said:

The movie comes out March 18. A couple days ago I saw an unfinished cut of it and could not be happier. I thought it was very loyal to the story and the character of Mickey Haller. Matthew McConaughey nails him. Those who loved the book will love the movie, I think. Those who don't know the book will love it just the same. The casting and acting is really superb. Like I said, I could not be happier. I'm very excited and can't wait to see what fans of the book think.

The film received positive reviews, scoring an 83% "certified fresh" rating on Rotten Tomatoes, based on 166 reviews with an average rating of 6.6/10. The site's critics consensus reads, "It doesn't offer any twists on the predictable courtroom thriller formula, but with a charming Matthew McConaughey leading its solid cast, The Lincoln Lawyer offers briskly enjoyable entertainment." At Metacritic, which assigns a rating out of 100 to reviews from mainstream critics, the film received an average score of 63, based on 30 reviews, which indicates "generally favorable reviews."

Roger Ebert of the Chicago Sun-Times gave the film 3 stars out of a possible 4, saying, "The plotting seems like half-realized stabs in various directions made familiar by other crime stories. But for what it is, The Lincoln Lawyer is workmanlike, engagingly acted and entertaining.

Retrieved from "https://movies.fandom.com/wiki/The_Lincoln_Lawyer?oldid=155868"
Community content is available under CC-BY-SA unless otherwise noted.