View src
watch 02:24
Wiki Targeted (Entertainment)
Do you like this video?
Play Sound
The Lion King 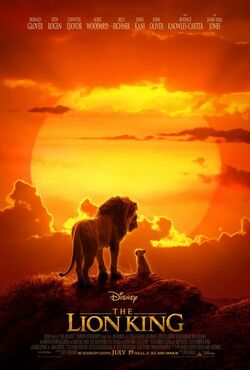 Plans for a Lion King remake were confirmed in September 2016 following the success of Favreau's Jungle Book adaptation. Much of the main cast signed on in early-2017 and principal photography began that summer on a blue screen stage in Los Angeles. The film was released in the United States on July 19, 2019 by Walt Disney Studios Motion Pictures.

In the Pride Lands of Africa, a pride of lions rule over the animal kingdom from Pride Rock. King Mufasa's and Queen Sarabi's newborn son, Simba, is presented to the gathering animals by Rafiki the mandrill, the kingdom's shaman and advisor. Mufasa shows Simba the Pride Lands and explains to him the responsibilities of kingship and the "circle of life", which connects all living things. Mufasa's younger brother, Scar, covets the throne and plots to eliminate Mufasa and Simba, so he may become king. He tricks Simba and his best friend Nala (to whom Simba is betrothed) into exploring a forbidden elephants' graveyard, where they are attacked by spotted hyenas led by Shenzi, Kamari, and Azizi. Mufasa is alerted about the incident by his majordomo, the hornbill Zazu, and rescues the cubs. Though upset with Simba, Mufasa forgives him and explains that the great kings of the past watch over them from the night sky, from which he will one day watch over Simba. Meanwhile, Scar visits the hyenas and manages to convince them to help him overthrow Mufusa in exchange for hunting rights in the Pride Lands.

Scar sets a trap for his brother and nephew, luring Simba into a gorge and having the hyenas drive a large herd of wildebeest into a stampede that will trample him. He informs Mufasa of Simba's peril, knowing that the king will rush to save his son. Mufasa saves Simba but ends up hanging perilously from the gorge's edge. Scar refuses to help Mufasa, instead sending him falling to his death. He then convinces Simba that the tragedy was Simba's own fault and advises him to leave the kingdom and never return. He orders the hyenas to kill the cub, but Simba escapes. Scar tells the pride that both Mufasa and Simba were killed in the stampede and steps forward as the new king, allowing his three hyena minions and the rest of their large pack to live in the Pride Lands.

Simba collapses in a desert and is rescued by Timon and Pumbaa, a meerkat and warthog, who are fellow outcasts. Simba grows up in the jungle with his two new friends and other animals, living a carefree life under the motto "hakuna matata" ("no worries" in Swahili). Now a young adult, Simba rescues Timon and Pumbaa from a hungry lioness, who turns out to be Nala. She and Simba reunite and fall in love, and she urges him to return home, telling him that the Pride Lands have become a drought-stricken wasteland under Scar's reign. Feeling guilty over his father's death, Simba refuses and storms off. He then encounters Rafiki, who tells him that Mufasa's spirit lives on in Simba. Simba is visited by the ghost of Mufasa in the night sky, who tells him that he must take his rightful place as king. Realizing that he can no longer run from his past, Simba decides to return to the Pride Lands.

Aided by his friends, Simba sneaks past the hyenas at Pride Rock and confronts Scar, who was about to fight Sarabi. Scar taunts Simba over his role in Mufasa's death and backs him to the edge of the rock, where he reveals to him that he murdered Mufasa. Enraged, Simba reveals the truth to the rest of the pride. Scar attempts to defend himself, but his knowledge of Mufasa's last moment (despite having previously claimed that he arrived too late at the gorge) exposes his role in Mufasa's death. Timon, Pumbaa, Rafiki, Zazu, and the lionesses fend off the hyenas while Scar, attempting to escape, is cornered by Simba at the top of Pride Rock. Scar begs for mercy and attempts to blame the hyenas for his actions; Simba spares his life, but orders him to leave the Pride Lands forever. Scar refuses and attacks his nephew, but Simba manages to toss him from the top of the rock. Scar survives the fall, but is attacked and killed by the hyenas, who overheard his attempt to betray them. Afterwards, Simba takes over the kingship and makes Nala his queen.

Later, with Pride Rock restored to its usual state, Rafiki presents Simba and Nala's newborn cub to the assembled animals, continuing the circle of life.

On September 28, 2016, Walt Disney Pictures confirmed that Jon Favreau would be directing a fast-tracked remake of the 1994 animated film The Lion King, which would feature the songs from the 1994 film, following a string of recent box office successes on the other Disney remake films such as Maleficent, Cinderella, The Jungle Book and Beauty and the Beast with the latter three also earning critical praise. Later on October 13, it was reported that Disney had hired Jeff Nathanson to write the screenplay for the remake. In November, talking with ComingSoon.net, Favreau said the virtual cinematography technology he used in The Jungle Book would be used to a greater degree in The Lion King.[3] Although the media reported The Lion King to be a live-action film, it actually utilizes photorealistic animation. Disney also did not describe it as live-action, only stating it would follow the "technologically groundbreaking" approach of The Jungle Book.

In mid-February 2017, Donald Glover was cast as Simba, with James Earl Jones reprising his role as Mufasa from the 1994 film.

In April, Billy Eichner and Seth Rogen were cast to play Timon and Pumbaa respectively. In July, John Oliver was cast as Zazu. In August, Alfre Woodard and John Kani were announced to play Sarabi and Rafiki, respectively.

Earlier in March, it was announced that Beyoncé was Favreau's top choice for the role of Nala and that the director and studio would be willing to do whatever it took to accommodate her busy schedule. Later on November 1, her role was confirmed in an official announcement, which also confirmed that Chiwetel Ejiofor would play the role of Scar as he had impressed Favreau after watching his antagonistic performance as Baron Mordo in the Marvel film Doctor Strange (2016). Other stars Eric Andre, Florence Kasumba, Keegan-Michael Key will be the voices of Azizi, Shenzi and Kamari while JD McCrary and Shahadi Wright Joseph will be the voices of young Simba and young Nala, respectively.

Production on the film commenced in the summer of 2017, on a blue screen stage in Los Angeles, California.

On November 1, 2017, it was announced that Hans Zimmer would return to score the film, having previously scored the 1994 animated version. On November 28, 2017, it was reported that Elton John had signed onto the project to rework his musical compositions from the original film before his retirement. The following day it was reported that Beyoncé would be assisting John in the reworking of the soundtrack. On February 9, 2018, John reported that he, Tim Rice and Beyoncé would create a new song for the end credits of the film. Later that month, it was revealed that four songs from the original film would be included in the film: "Can You Feel the Love Tonight", "Hakuna Matata", "I Just Can't Wait to Be King", and "Circle of Life".

The Lion King was released on July 19, 2019, which marks the 25th anniversary of the release of the original film.

The Lion King received mixed reviews from both critics and audiences with a 53% on Rotten Tomatoes based on 402 reviews with an average score of 6.01/10.