Start a Wiki
The Lost World 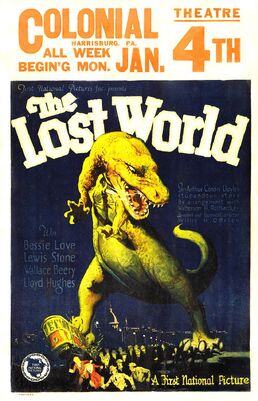 Not rated on its first release in the United States. Has been shown on television classified as TVG.
Budget
$700,000
Book
The Lost World

The Lost World is a 1925 silent fantasy adventure film and an adaptation of Arthur Conan Doyle's 1912 novel of the same name. The movie was produced by First National Pictures, a large Hollywood studio at the time, and stars Wallace Beery as Professor Challenger. This version was directed by Harry O. Hoyt and featured pioneering stop motion special effects by Willis O'Brien (an invaluable warm up for his work on the original King Kong). Writer Doyle appears in a frontispiece to the film. In 1998, the film was deemed "culturally, historically or aesthetically significant" by the Library of Congress and selected for preservation in the United States National Film Registry.

From a lost expedition to a plateau in Venezuela, Paula White brings the journal of her father explorer Maple White to the eccentric Professor Challenger in London. The journal features sketches of dinosaurs which is enough proof for Challenger to publicly announce that dinosaurs still walk the earth. Met with ridicule at an academic meeting at the Zoological Hall, Challenger reluctantly accepts a newspaper's offer to finance a mission to rescue Maple White. Professor Challenger, Paula White, sportsman Sir John Roxton, news reporter Edward Malone (who is a friend of Roxton and wishes to go on the expedition to impress his fiancée), a sceptical professor Summerlee, an Indian servant Zambo, and Challenger's butler Austin leave for the plateau.

At their campsite at the base of the plateau, the explorers are shocked when a large rock falls, sent their way by an ape-man perched on top of an overhead ledge. As the crew look up to see their attacker, Challenger spies overhead a  Pteranodon (mistakenly calling it a Pterodactyl) which sighting proves that the statements in Maple White's diary are true. Leaving Zambo and Austin at the camp, they cross a chasm onto the plateau by cutting down a tree and using it as a bridge, but it is knocked over by an Apatosaurus (referred to as Brontosaurus), leaving them trapped.

The explorers witness various life-and-death struggles between the prehistoric beasts of the plateau. An Allosaurus attacks an Edmontosaurus, and knocks it into a bog. The Allosaurus then attacks, and is driven off by a Triceratops. Eventually, the Allosaurus makes its way to the campsite and attacks the exploration party. It is finally driven off by Ed who tosses a torch into its mouth. Convinced that the camp isn't safe, Ed climbs a tree to look for a new location, but is attacked by the ape-man. Roxton succeeds in shooting the ape-man, but the creature is merely wounded and escapes before he can finish him off. Meanwhile, a Styracosaurus is attacked by the Allosaurus, and gores it to death. Suddenly, a Tyrannosaurus attacks and kills the Styracosaurus, along with an unfortunate Pteranodon.

The explorers then make preparations to live on the plateau potentially indefinitely. A catapult is constructed and during a search for Maple White, Roxton finds his remains, confirming his death. It is at this time that Ed confesses his love for Paula and the two are unofficially wed by Summerlee who used to be a minister.

Shortly afterwards, as the paleontologists are observing a Brontosaurus, an Allosaurus attacks it and the Brontosaurus falls off the edge of the plateau, becoming trapped in a mud bank at the base of the plateau. Soon afterwards, a volcano erupts causing a mass stampede among the giant beasts of the lost world. The crew is saved when Paula's pet monkey Jocko climbs up the plateau carrying a rope. The crew use the rope to pull up a rope ladder constructed by Zambo and Austin and then climb down.

As Ed makes his descent, he is again attacked by the ape-man who pulls the rope ladder. The ape-man is again shot and finally killed by Roxton. They discover the Brontosaurus that had been pushed off the plateau had landed softly in the mud of the river, trapped but still alive, and Challenger manages to bring it back to London, as he wants to put it on display as proof of his story.

However, while being unloaded from the ship it escapes and causes havoc until it reaches Tower Bridge, where its massive weight causes a collapse, and it swims down the River Thames. Challenger is morose as the creature leaves. Ed discovers that the love he left in London has married in his absence, allowing him and Paula to be together. Roxton morosely but gallantly hides his love for Paula as Paula and Ed leave together, while two passersby note: "That's Sir John Roxton--sportsman."

Note: All human cast members who are listed in the on-screen credits are billed as "Mr..." or "Miss...."

(The film's program mentions the Diplodocus but none are shown in the surviving footage.)

Other animals on the plateau[edit | edit source]

Animals seen in the Amazon, but not the plateau[edit | edit source]

Retrieved from "https://movies.fandom.com/wiki/The_Lost_World_(1925)?oldid=113676"
Community content is available under CC-BY-SA unless otherwise noted.