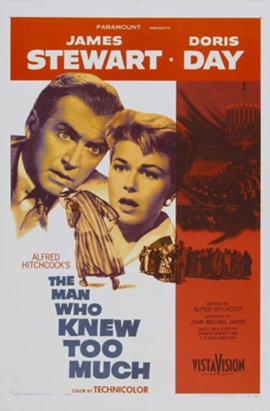 A doctor from Indiana and his wife, a former singer, visit Morocco on vacation. While visiting the African country, the couple witness a murder, and shortly thereafter their son is kidnapped.

After days of shooting when Hitchcock had not said one word about her performance, Doris Day generously offered to have herself replaced. Hitchcock was shocked by her offer, and insisted that his lack of criticism was a good thing, as he had found nothing in her performance to criticize. The two then got on very well.

The song "Que Sera Sera" won the Academy Award for Best Song of 1956, and became one of Doris Day's most famous and successful recordings.

This was the first and only time Hitchcock attempted a remake of his own film.

The conductor at the concert is played by film composer Bernard Herrmann, although the piece he is conducting was not written by him, but was taken from the original film.

Retrieved from "https://movies.fandom.com/wiki/The_Man_Who_Knew_Too_Much?oldid=113727"
Community content is available under CC-BY-SA unless otherwise noted.