watch 01:45
The Loop (Movies)
Do you like this video?
Play Sound
The Manchurian Candidate 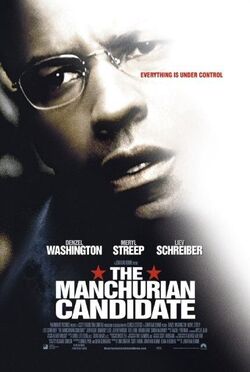 The film was released in the United States on July 30, 2004 by Paramount Pictures.

Major Ben Marco (Denzel Washington) is a war veteran who commanded a famous U.S. Army raid during the Persian Gulf War. For his role in that mission, Sergeant Raymond Shaw (Liev Schreiber) was awarded the Medal of Honor for single-handedly defeating the enemy and rescuing all but two of his men. Shaw has gone on to become a famous U.S. Congressman and, thanks to the influence of his mother, Virginia Senator Eleanor Prentiss Shaw (Meryl Streep), is nominated as the Vice-Presidential candidate over the favorite Connecticut Senator Tom Jordan (Jon Voight). Shaw is withdrawn, but he opens up only to his mother and his childhood sweetheart, Tom Jordan's daughter Jocelyn (Vera Farmiga).

One of Marco's former NCOs, Corporal Al Melvin (Jeffrey Wright), contacts him and says that he experiences confusing memories and "dreams" about their lost Army unit. He is clearly mentally ill, but he shows Marco some images he has drawn from his dreams. Marco begins to also have dreams about being captured on that raid and brainwashed by scientists led by a mysterious South African man (Simon McBurney), and of himself and Shaw murdering their fellow soldiers. Marco begins investigating what really happened during the war, and travels to New York. A woman named Eugenie (Kimberly Elise), an outgoing supermarket clerk with whom Marco interacts frequently, sits with him on the train and ultimately offers him a place to stay.

As Marco investigates, he discovers an implant in his back and, soon thereafter, one in Shaw's after a confrontation at campaign headquarters. After having the one taken from Shaw analyzed, Marco realizes that it is a nanotechnological experiment connected with Manchurian Global, a powerful private equity firm with major political connections. Marco researches Manchurian and recognizes the South African man as Dr. Atticus Noyle, a former Manchurian geneticist-turned-mercenary, from one of his nightmares. Marco brings his findings to the attention of Jordan, who, although he doesn't entirely believe the story, confronts the Shaws and suggests that Shaw bow out of the campaign. Instead, Eleanor "activates" Shaw and orders him to kill Jordan. Jocelyn is also killed when she tries to stop an entranced Shaw.

Eugenie reveals herself to actually be with the FBI, which has been monitoring the conspiracy for years. They found an implant in Melvin, who died like all of Shaw and Marco's squadmates under mysterious circumstances. They arrange a meeting between Marco and Shaw to convince Shaw of his condition. The meeting takes place just as Governor Arthur and Shaw win the White House, and Shaw receives a phone call from Eleanor for Marco. Eleanor, who is deeply linked with Manchurian, uses trigger words to control Marco's mind, giving him commands to assassinate the President-elect so that Shaw can become President. Eleanor admits to Shaw that she voluntarily gave him to the brainwashers for the good of the country. However, the trauma of Jocelyn's death gives Shaw the strength to resist the mind control.

At the climactic moment, Shaw deliberately places himself between Marco and the President-elect. As Eugenie rushes through the celebration crowd trying to find Marco, Shaw looks up at the vent where Marco is and gives a nod of clearance to kill him. Shaw then dances with his mother and steers them both into the marked position, where Marco kills both of them with a single shot from his rifle. Marco prepares to kill himself, but Eugenie, who saw Shaw's nod, arrives and stops him with a shot to his chest.

The FBI decides to protect Marco's innocence by framing a deceased Manchurian Global contractor as the shooter. The Manchurian executives watch their entire conspiracy revealed on television, but make no attempt to flee, knowing the truth's exposure has left them nowhere to run. In the last scene, Eugenie takes Marco to the compound on a remote island where he was conditioned, which by now the FBI has found. Reflecting on his time at the compound, Marco proceeds to drop a photo of his Army unit and Shaw's Medal of Honor into the sea.

Retrieved from "https://movies.fandom.com/wiki/The_Manchurian_Candidate_(2004)?oldid=178536"
Community content is available under CC-BY-SA unless otherwise noted.