Start a Wiki
watch 01:38
The Loop (Movies)
Do you like this video?
The Masque of the Red Death 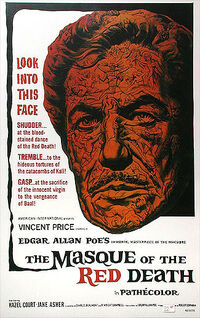 Based on a short story by Edgar Allan Poe
Cast

Not rated on its first release in the United States.

Rated X on its first release in the United Kingdom.
Book
The Masque of the Red Death

The Masque of the Red Death is a 1964 British horror film starring Vincent Price in a tale about a prince who terrorizes a plague-ridden peasantry while merrymaking in a lonely castle with his jaded courtiers.

The film was directed by Roger Corman; the screenplay by Charles Beaumont and R. Wright Campbell was based upon the 1842 short story of the same name by American author Edgar Allan Poe and incorporates a sub-plot based on another Poe tale, "Hop-Frog". Another sub-plot is drawn from "Torture by Hope" by Auguste Villiers de l'Isle-Adam.

It is the seventh of a series of eight Corman film adaptations largely based on Poe's works made by American International Pictures.

The Masque of the Red Death has been released on DVD in the United States.

The story is set in medieval Europe. On the slopes of a mountain, an old woman meets a mysterious, red-cloaked figure, shuffling Tarot cards. The figure gives the woman a white rose, which then turns red and dappled with blood.

Prince Prospero, a Satanist, visits the village over which he holds dominion, and is angrily confronted by two poor and starving villagers, Gino and Lodovico. Prospero angrily sentences the pair to death, but Lodovico's daughter Francesca begs for their lives. Prospero discovers that the old woman who encountered the red figure is infected with a deadly plague, the Red Death. He orders the village burned down to prevent the spread of the disease, abducts Francesca, and then invites several dozen of the local nobility to his castle.

At the castle, Francesca is finely dressed and tutored in etiquette by Prospero's jealous consort, Juliana, and the gathered nobility are entertained by a pair of dwarf dancers, Esmeralda and Hop-Toad. When Esmeralda accidentally spills a goblet of wine, one of Prospero's guests, Alfredo, strikes her. Juliana expresses her wish to Prospero to be initiated in to his Satanic cult, and, that night, Francesca is terrified to discover Juliana and Prospero lying in a strange, hypnotic state in the Black Room.

Gino, meanwhile, is being held prisoner in Prospero's castle, with the castle guards teaching him armed combat so that he can fight to the death against Ludovico as entertainment for the nobility. While Prospero further attempts to seduce Francesca, Juliana performs a ritual in the Black Room, pledging her soul to Satan. Francesca is horrified to learn of her actions, but Juliana gives Francesca the key to Ludovico and Gino's cell, and tells her to leave. During their escape, Gino and Ludovico kill three guards, and are then recaptured by Prospero, who points out to Francesca how her father and Gino have sinned.

At a grand feast, Prospero summons Gino and Ludovico. As they refuse to fight each other, he instead has them each choose daggers to cut themselves with. One of the daggers is coated with poison, and, upon choosing the last dagger (which, by process of elimination, is revealed to be the poisoned one,) Ludovico attempts to stab Prospero with it, but Prospero stabs him through the heart with his sword. He then casts Gino out of the castle, leaving him to be killed by the Red Death. Gino runs away through the woods, and encounters the red-cloaked figure, who presents him with a Tarot card, which he says represents mankind. Juliana is then put through her final initiation ceremony, where she drinks from a chalice, and suffers a terrifying hallucination (one of Corman's distinctive psychedelic dream sequences,) involving wild, dancing figures that stab at her as she lies prostrate on a table. Awakening from her dream, Juliana then declares herself the wife of Satan, proud that she has 'survived her own sacrifice'. She wanders out through the coloured rooms, and is viciously attacked and killed by a crow. Prospero comments that Juliana is now truly married to Satan.

Meanwhile, Hop-Toad, enraged by Alfredo's previous ill-treatment of Esmeralda, plans his revenge by persuading Alfredo to wear an ape costume to Prospero's grand masked ball, where Prospero has instructed that no one is to wear red. In the guise of the ape's trainer, Hop-Toad cruelly humiliates Alfredo in front of the assembled guests, before soaking him with brandy and setting him on fire. Prospero rewards Hop-Toad for his amusing 'entertainment'. Outside the castle walls, Gino returns to rescue Francesca, and once again encounters the red-cloaked figure. The figure tells him not to enter the castle, and promises that he will send Francesca out to Gino shortly.

Amid the general atmosphere of debauchery and depravity at the ball, Prospero notices the entry of the mysterious, red-cloaked figure. He and Francesca follow the figure through in to the Black Room, where Prospero believes the figure to be an ambassador of Satan. He asks to see the figure's face, but the figure tells Prospero that "There is no face of Death until the moment of your own death." The ball is transformed into a danse macabre, changing from a maddening revelry to a grim ballet as the figure causes all of the nobles to die of the Red Death - while the corpses dance. Still believing the figure is Satan, Prospero asks for Francesca to be given the same high status in Hell as he believes he himself will receive. The figure appears to consent to his request, and sends Francesca outside, where he knows Gino is waiting. Before leaving, Francesca sadly kisses Prospero.

The red-cloaked figure then reveals that he is not a servant of Satan ("Death has no master",) and tells Prospero that his beliefs will not save him, declaring that "Each man creates his own God for himself - His own Heaven, his own Hell." Prospero rips off the figure's red mask to reveal Prospero's own blood-spattered face. The figure is the Red Death himself - Prospero's 'own Hell', and the 'moment of his death'. Prospero attempts to flee through the now infected crowd, but his red-cloaked self is always in front of him. The Red Death finally corners Prospero in the Black Room, asking, "Why should you be afraid to die? Your soul has been dead for a long time", and strikes him down.

In an epilogue, the Red Death is seen playing with his Tarot cards with a young child. Other similarly cloaked figures then gather around him, each wearing a different colour: the White Death, the Yellow Death, the Golden Death, the Blue Death, the Violet Death and the Black Death. They discuss among themselves the numbers of people each of them had 'claimed' that night, each accepting of their endless terrible task. When asked of his work, the Red Death says to them, "I called many...Peasant and prince...The worthy and the dishonoured. Six only are left." Among the surviving six are Francesca, Gino, Hop-Toad, Esmeralda, the little girl that the Red Death plays cards with, and an old man from a nearby village. The Red Death declares "Sic transit gloria mundi" (Latin for "Thus passes the glory of the world") and the cloaked figures file offscreen in a grim procession. Over the procession are Poe's words: "And darkness and decay and the Red Death held illimitable dominion over all".

Roger Corman had a great deal of trouble coming up with a screenplay he was happy with. Drafts were written by John Carter, Robert Towne and Barboura Morris before having success with Charles Beaumont and R. Wright Campbell.

Use in music[edit | edit source]

A dialogue from the movie appears in the song "And When He Falleth" by Theatre Of Tragedy, on the album Velvet Darkness They Fear.

In the intro to "Beneath The Mask" by the doom metal band Bell Witch, a dialogue from the scene in which Prospero meets the Red Death in the Black Room is sampled.

Retrieved from "https://movies.fandom.com/wiki/The_Masque_of_the_Red_Death?oldid=135232"
Community content is available under CC-BY-SA unless otherwise noted.