watch 00:59
The Loop (Movies)
Do you like this video?
The Matrix Reloaded 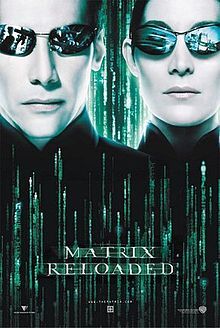 The Matrix Reloaded is the 2003 sequel to the 1999 science fiction film The Matrix. It was made back-to-back along with The Matrix Revolutions. It develops on questions raised in the first film and gives them a better in-depth story with conflicting ideals from different characters. While the film received generally positive reviews from critics, Fan reception was more mixed.

It has been six months since Neo, the One freed many people from the Matrix. Neo comes back to Zion for a meeting that the Machines plan to attack Zion after a century of war. Morpheus gives a speech to the free people of Zion that they will defend themselves. Neo remembered that he had a dream of Trinity dying at the hand of an Agent. Morpheus still believes that Neo is the key to end the war between Zion and the Machines. Inside the Matrix, Neo has to find the Source which will help him end the war. To do that, Neo and his allies are required to find the Merovingian. On the way, Neo encounters Smith who is now a duplicating virus and not an agent. At the Merovingian's chateau, he believed that life is about cause and effect. His wife known as Persephone, secretly helped Neo, Morpheus and Trinity find the Keymaker. On the freeway, a group of three agents and two albino twins keep attacking Morpheus and Trinity until Neo arrived and saved Morpheus and the Keymaker. Meanwhile, in the real world, the Vigilant crew was bombed by Sentinels. Neo and Trinity decided to replace the Vigilant crew to finish the mission. The Keymaker helped Neo open a door which lead him to the Architect, the creator of the Matrix. The Architect explains to Neo that the One has had five precursors and that the One is supposed to reboot the Source every century to prevent the extinction of humanity. Neo decides to leave the room with the door to his left and rescue Trinity. Back in the real world, Neo tells Morpheus that the prophecy is a false, according to the Architect. The Nebuchadnezzar ship was destroyed by Sentinels as Morpheus was shocked in disbelief.

The Matrix Reloaded received generally positive reviews from critics with a 73% based on 245 reviews with an average score of 6.81/10 on Rotten Tomatoes.

Wikiquote has a collection of quotations from or about:
The Matrix Reloaded

Retrieved from "https://movies.fandom.com/wiki/The_Matrix_Reloaded?oldid=263973"
Community content is available under CC-BY-SA unless otherwise noted.