View src
watch 01:33
Wiki Targeted (Entertainment)
Do you like this video?
Play Sound
The Matrix Revolutions 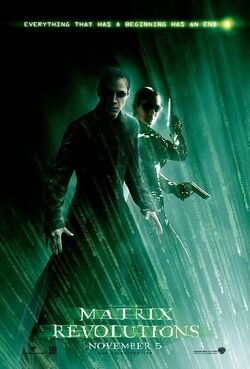 The Matrix Revolutions is a 2003 science fiction action film written and directed by The Wachowski Brothers. It was the third installment of The Matrix trilogy, released six months following The Matrix Reloaded. The film was released simultaneously in 60 countries on November 5, 2003. While it is the final film in the series, the Matrix storyline is continued in The Matrix Online. It was the first live-action feature film to be released in both regular and IMAX theaters at the same time.

Neo and Bane lie unconscious in the medical bay of the ship Hammer. Meanwhile, Neo finds his digital self trapped in a virtual subway station – named, "Mobil Ave", "mobil", being an anagram for "limbo" – a transition zone between the Matrix and the Machine City. In that subway station, he meets a "family" of programs, including a girl named Sati, whose father tells Neo the subway is controlled by the Trainman, an exiled program loyal to the Merovingian. When Neo tries to board a train with the family, the Trainman refuses and overpowers him.

Seraph contacts Morpheus and Trinity on behalf of the Oracle, who informs them of Neo's confinement. Seraph, Morpheus and Trinity enter Club Hel, where they confront the Merovingian and force him to release Neo. Troubled by visions of the Machine City, Neo visits the Oracle, who reveals that Smith intends to destroy both the Matrix and the real world. She states that "everything that has a beginning has an end", and that the war will conclude. After Neo leaves, a large group of Smiths assimilates Sati, Seraph and the unresisting Oracle, gaining her powers of precognition.

In the real world, the crew of the Nebuchadnezzar and the Hammer find and reactivate Niobe's ship, the Logos. They interrogate Bane, who says that he has no recollection of the earlier massacre. As the captains plan their defense of Zion, Neo requests a ship to travel to the Machine City. Motivated by her encounter with the Oracle, Niobe offers him the Logos. Neo departs, accompanied by Trinity. Bane, who has stowed away on the Logos, takes Trinity hostage. Neo realizes that Bane has been assimilated by Smith and a fight ensues. Bane ends up cauterizes Neo's eyes with a power cable, blinding him; however, Neo discovers an ability to perceive the world as golden light. Neo kills Bane, and Trinity pilots them to the Machine City.

Niobe and Morpheus set out for Zion with the Hammer to aid the human defenses against the Sentinels. In Zion, the fatally wounded Captain Mifune instructs Kid to open the gate for the Hammer. When it arrives, it discharges its EMP, disabling the Sentinels but also the remaining defenses. The humans are forced to retreat and wait for the next attack, thinking that it will be their last stand. Near the Machine City, Neo and Trinity are greeted by thousands of missiles which Neo attempts to destroy, but is overwhelmed by their numbers. The Logos is attacked by the Sentinels forcing them to fly above the missiles for a few seconds. They breach the cloud layer and see Earth's real sky, to which Trinity whispers the word "Beautiful". Upon descent, they lose control causing them to crash the Logos into the Machine City. The crash kills Trinity. Neo enters the Machine City and encounters "Deus Ex Machina", the machine leader. Neo, warning that Smith plans to conquer both the Matrix and the real world, offers to stop Smith in exchange for peace with Zion. The machine leader agrees, and the Sentinels stop attacking Zion.

The Machines provide a connection for Neo to enter the Matrix. Inside, the Smith with the Oracle's powers steps forth, saying that he has foreseen his victory against Neo. After a protracted battle, Neo – finding himself unable to defeat Smith – allows himself to be assimilated. The machine leader sends a surge of energy into Neo's body in the real world. Because Neo is connected to the Source, the energy surge causes the Neo-Smith clone and all other Smith clones in the Matrix to be destroyed; deleting Smith once and for all, though Neo's life is sacrificed in the process. The Sentinels withdraw from Zion, Morpheus and Niobe embrace, and Neo's body is carried away by the machines. The Matrix is rebooted, and the Architect encounters the Oracle in a park. They agree that the peace will last "as long as it can", and that all humans will be offered the opportunity to leave the Matrix. When questioned about Neo's fate, the Oracle tells Sati that she thinks they will see Neo again as Sati reveals she created a beautiful sunrise over the horizon in Neo's honor. Seraph asks the Oracle if she knew this would happen; she replies that she did not know, but she believed.

Actress Gloria Foster, who played the Oracle in the first and second films, died before the completion of her filming for the third. She was replaced by actress Mary Alice. Her changed appearance is addressed in the film's plot.

Filming occurred concurrently with its predecessor, The Matrix Reloaded, and live-action sequences for the video game Enter the Matrix. This took place primarily at Fox Studios in Sydney, Australia. Most notably, the subway scenes were filmed at the disused tunnels of St James railway station, and the end sequence with the Oracle and the Architect was filmed in the Royal Botanic Garden. Carrie-Anne Moss broke her leg during the shooting in Australia.

Sound editing on The Matrix trilogy was completed by Danetracks in West Hollywood, California.

In contrast to its predecessors, very few "source" tracks are used in the film. Aside from Don Davis' score, again collaborating with Juno Reactor, only one external track (by Pale 3) is used. Although Davis rarely focuses on strong melodies, familiar leitmotifs from earlier in the series reappear. For example, Neo and Trinity's love theme—which briefly surfaces in the two preceding films—is finally fully expanded into "Trinity Definitely"; the theme from the Zion docks in Reloaded returns as "Men in Metal", and the energetic drumming from the Reloaded tea house fight between Neo and Seraph opens "Tetsujin", as Seraph, Trinity and Morpheus fight off Club Hel's three doormen. The climactic battle theme, named "Neodämmerung" (in reference to Wagner's Götterdämmerung), features a choir singing extracts (shlokas) from the Pavamana Mantra, introduced in the Upanishads. The chorus can be roughly translated from Sanskrit as follows: "lead us from untruth to truth, lead us from darkness to light, lead us from death to immortality, peace peace peace". The extracts were brought to Davis by the Wachowskis when he informed them that it would be wasteful for such a large choir to be singing simple "ooh"s and "aah"s (according to the DVD commentary, Davis felt that the dramatic impact of the piece would be lost if the choir was to sing 'This is the one, see what he can do' in plain English). These extracts return in the film's denouement, and in Navras, the track that plays over the closing credits (which may be considered a loose remix of "Neodämmerung").

The film's budget was estimated between US$110 million and $150 million. It grossed over $139 million in North America and approximately $427 million worldwide, roughly half of The Matrix Reloaded box-office total. In its first five days of release, it grossed $83.8 million, but dropped 66% during the second week.

The Matrix Revolutions received mixed to negative reviews from critics. On review aggregation website Rotten Tomatoes, the film received an approval rating of 36% based on 216 reviews, with an average rating of 5.28/10. The site's critical consensus reads, "A disappointing conclusion to the Matrix trilogy as characters and ideas take a back seat to the special effects." On Metacritic, the film has a weighted average score of 47 out of 100 based on 41 critics, indicating "mixed or average reviews". Audiences surveyed by CinemaScore gave the film a grade B.

Roger Ebert of the Chicago Sun-Times gave the film three stars out of four, despite offering criticisms of his own, on the grounds that it at least provided closure to the story well enough so that fans following the series would prefer seeing it as to not.

While making the Matrix films, the Wachowskis told their close collaborators they had no intention of making another one after The Matrix Revolutions. Instead, they gave their blessing to the notion of gamers "inherit[ing] the storyline", and The Matrix Online video game was billed as the official continuation. In February 2015, in interviews promoting Jupiter Ascending, Lilly Wachowski called a return to The Matrix a "particularly repelling idea in these times", noting the studios' tendency to green-light sequels, reboots and adaptations over original material, while Lana Wachowski, addressing rumors about whether there was going to be a reboot, said that they haven't heard anything, but she believed the studio might be looking to replace them.

In March 2017, Warner Bros. was in early stages of developing a relaunch of the franchise with Zak Penn in talks to write a treatment and interest in getting Michael B. Jordan attached to star. According to The Hollywood Reporter neither the Wachowskis nor Joel Silver were involved with the endeavor, although the studio would like to get at minimum the blessing of the Wachowskis. Penn responded to the report that the words "reboot" and "remake" were inaccurate, and instead he is interested in seeing stories set in the already established universe. The previous month, Keanu Reeves said he would return to a potential new Matrix film only if the Wachowskis were writing and directing.