Start a Wiki
watch 01:21
The Loop (Movies)
Do you like this video?
The Maze Runner 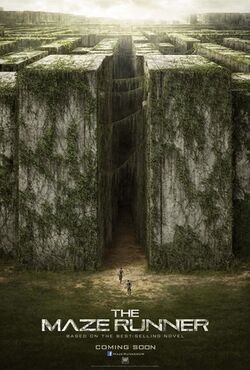 The Maze Runner is a 2014 American science-fiction mystery action thriller film based on a 2009 book of the same name by James Dashner, directed by Wes Ball and script by Noah Oppenheim. It was released on September 19, 2014, in the United States by 20th Century Fox.

A sequel, Maze Runner: The Scorch Trials, was released on September 18, 2015.

Thomas (Dylan O'Brien), a teenager, arrives in a glade at the center of a giant labyrinth. Like the other youths dumped there before him, he has no memory of his previous life. Thomas quickly becomes part of the group and soon after demonstrates a unique perspective that scores him a promotion to Runner status, those who patrol the always-changing maze to find an escape route. Together with Teresa (Kaya Scodelario), the only female, Thomas tries to convince his cohorts that he knows a way out.

The Wall Street Journal said critics considered the film better than most young adult book-to-film adaptations due to its "strong performances and a creepy, mysterious atmosphere". Review aggregator Rotten Tomatoes gives the film a 64% rating based on 146 reviews and an average rating of 5.9/10. The site's consensus states: "With strong acting, a solid premise, and a refreshingly dark approach to its dystopian setting, The Maze Runner stands out from the crowded field of YA sci-fi adventures". Metacritic gives the film a score of 56 out of 100, based on 34 critics, indicating "mixed or average reviews". Audiences surveyed by CinemaScore gave the film a grade of "A-" on an A+ to F scale.

Retrieved from "https://movies.fandom.com/wiki/The_Maze_Runner?oldid=222151"
Community content is available under CC-BY-SA unless otherwise noted.