Start a Wiki
The Meg 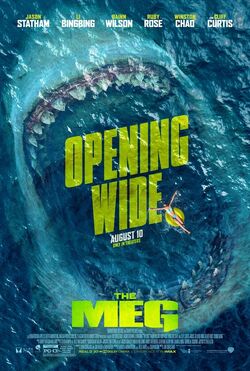 Previously thought to be extinct, a massive creature attacks a deep-sea submersible, leaving it disabled and trapping the crew at the bottom of the Pacific. With time running out, a visionary oceanographer recruits rescue diver Jonas Taylor to save the crew and the sea itself from an unimaginable threat -- a 75-foot-long prehistoric shark known as the Megalodon. As the extinct shark freed itself from the bottom of the sea, it's up to Jonas to team up with a oceanographer, Suyin, find the megalodon, and kill the shark as it goes in a bloody carnage.

Retrieved from "https://movies.fandom.com/wiki/The_Meg?oldid=162523"
Community content is available under CC-BY-SA unless otherwise noted.