$76,657,0002
The Muppet Movie is the first of a series of live-action musical feature films starring Jim Henson's Muppets. Released in 1979, the film was produced by Henson Associates and released by ITC Entertainment.1 It was released between the third and fourth seasons of The Muppet Show.

The film is dedicated to ventriloquist Edgar Bergen who died during production.

The film opens with the various members of the Muppet cast gathering to see the first screening of their new movie.

As the film-within-the-film opens, Kermit the Frog enjoys a relaxing afternoon in a Florida swamp, singing "Rainbow Connection" and strumming his banjo, when he is approached by an agent (Dom DeLuise) who encourages Kermit to pursue a career in show business. Inspired by the idea of "making millions of people happy," Kermit sets off on a cross-country trip to Hollywood, but is soon pursued by the villainous Doc Hopper (Charles Durning), (patterned after Colonel Harlan Sanders of "Kentucky Fried Chicken") and his shy assistant Max (Austin Pendleton) in an attempt to convince Kermit to be the new spokesman of his struggling French-fried frog legs restaurant franchise, at which Kermit is horrified. As Kermit continues to spurn Doc's advances, Hopper resorts to increasingly vicious means of persuasion.

Kermit then meets Fozzie Bear, who had been working as a hapless stand-up comedian in a sleazy bar. Kermit invites Fozzie to accompany him, and the two set out in Fozzie’s Studebaker. The duo’s journey includes misadventures which introduce them to a variety of eccentric human and Muppet characters, including Dr. Teeth and The Electric Mayhem and their manager Scooter (who receive a copy of the script from the pair), Gonzo and Camilla the Chicken, Sweetums (who ran after them after they thought he declined their offer), and the immediately love stricken Miss Piggy.

Kermit and Miss Piggy begin a relationship over dinner that night, when Doc Hopper and Max kidnap Miss Piggy to lure Kermit into a trap. Using an electronic cerebrectomy device, mad scientist Professor Krassman (Mel Brooks), attempts to brainwash Kermit to perform in Doc’s commercials until Miss Piggy, insulted by Krassman, breaks free in a rage and defeats Doc Hopper's henchmen. After receiving a job offer, however, she promptly abandons Kermit in the restaurant alone and sad.

After being joined by Rowlf the Dog and eventually Miss Piggy once more, the Muppets continue their journey. Their car breaks down and during a campfire that night, they sadly consider that they may miss the audition tomorrow, and Gonzo cheers up most of the group with a song about his longing to find his place in the world, while Kermit wanders off, ashamed of himself for seemingly bringing his friends into a dead end, and wondering whether his dreams were really worth leaving home for. Upon consulting a more optimistic vision of himself, Kermit remembers that it was not just his friends' belief in the dream that brought them this far, but also his own faith in himself. Reinvigorated, he returns to camp to find that the Electric Mayhem and Scooter have read the script in advance, and arrived to help them the rest of the way.

Just as it seems they are finally on their way, the group is warned by Max that Doc Hopper has hired an assassin (Scott Walker) to kill Kermit. Kermit decides he will not be hunted by a bully any longer and proposes a Western-style showdown in a nearby ghost town inhabited by Dr. Bunsen Honeydew and his assistant Beaker, who invent materials that have yet to be tested. While confronting Hopper, Kermit explains his motivations, attempting to appeal to Hopper’s own hopes and dreams, but Hopper is unmoved and orders his henchmen to kill him and all his so many friends. They are saved only when one of Dr. Bunsen's inventions, "insta-grow" pills, temporarily turns Animal into a giant, scaring off Hopper and his mens.

The Muppets proceed to Hollywood, and are hired by producer and studio executive Lew Lord (Orson Welles). The Muppets attempt to make their first movie involving a surreal pastiche of their experiences. The first take suddenly erupts into a catastrophic explosion that makes a hole in the roof through which a portion of rainbow shines through on the Muppets. The film ends as the Muppets, joined by the characters from he "The Land of Gorch" and the James Frawley Muppet, sing "Rainbow Connection." Sweetums bursts and crashes through the screen, ending the film, having finally caught up with the rest of the Muppets. 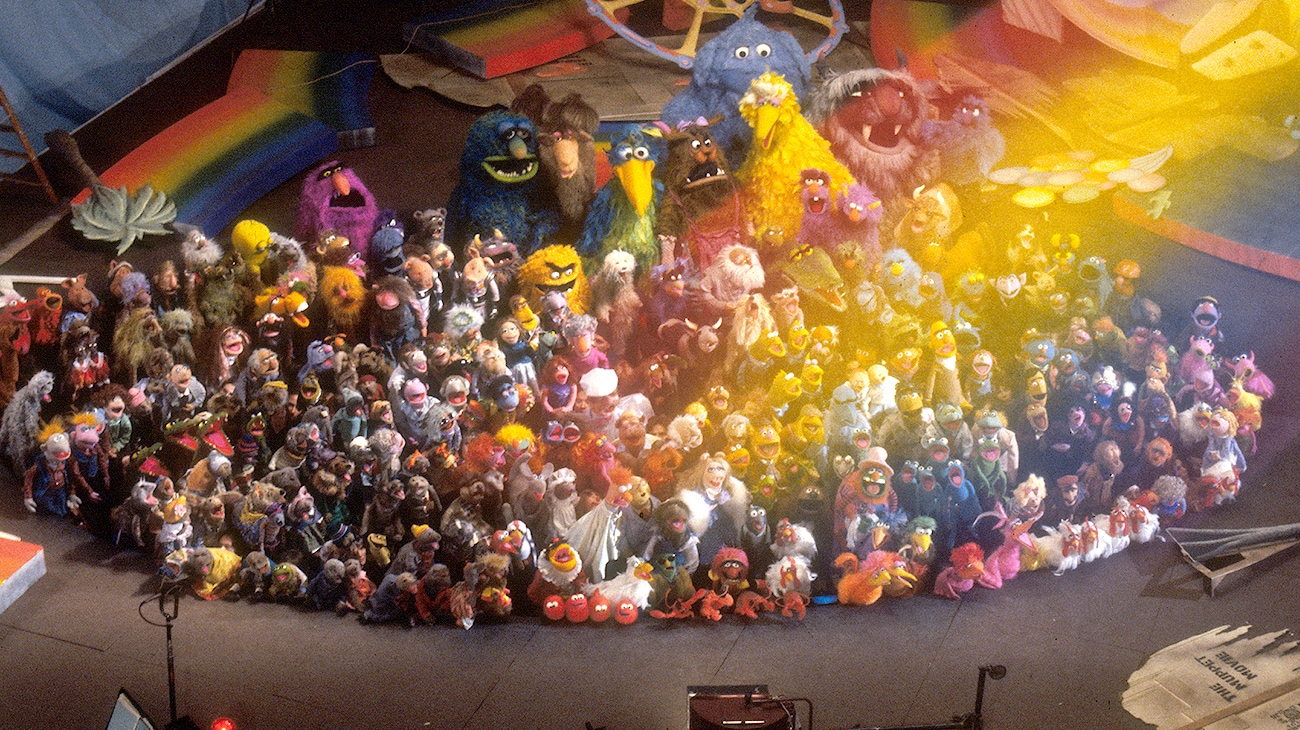 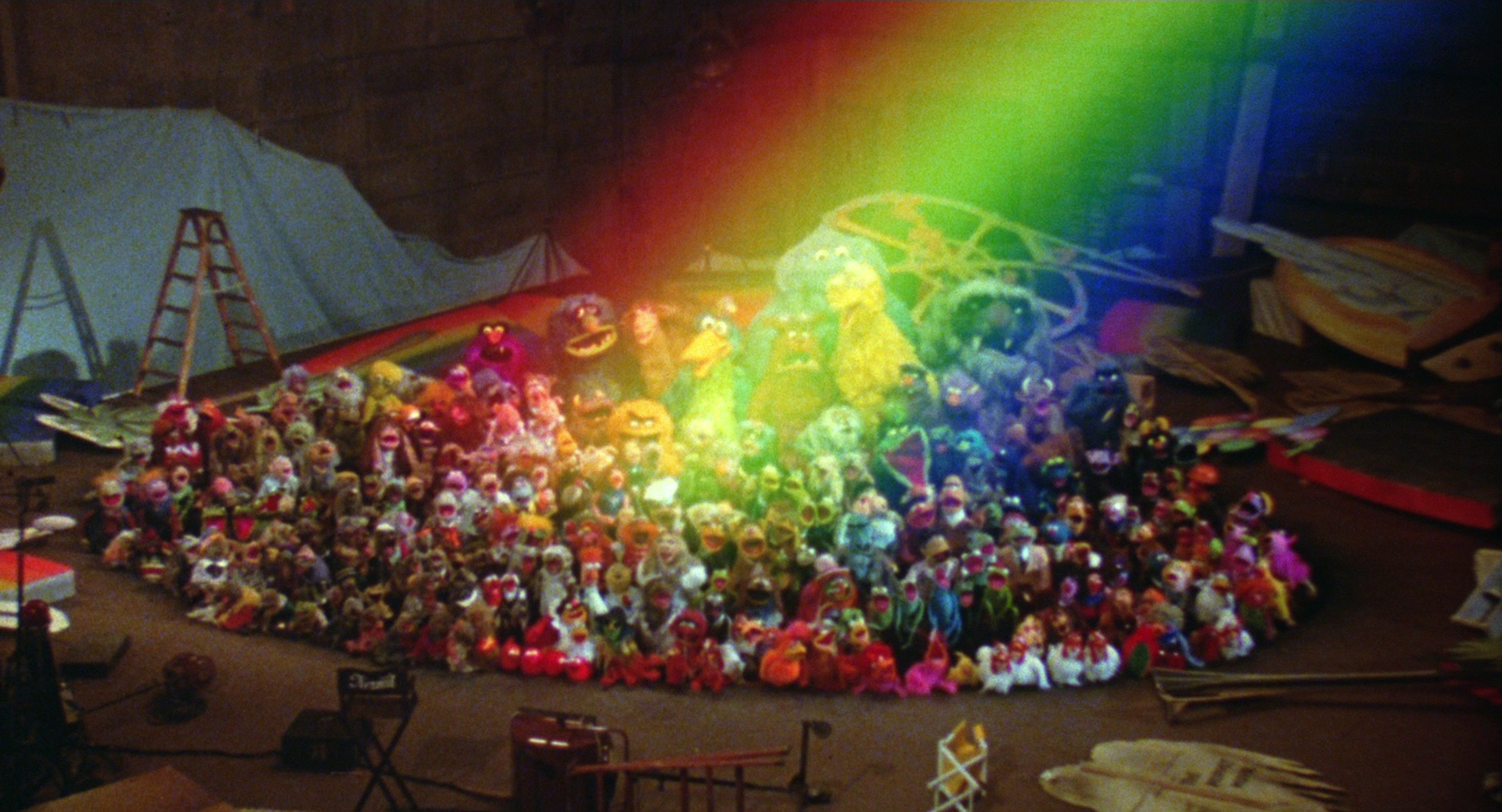 Austin Pendleton, who played Max in The Muppet Movie, recalled that the film was shot on "a very unhappy set, because Jim [Frawley] was very unhappy directing that movie. And I noticed that was the only time the Muppet people used an outside person to direct a Muppet movie. They never did that again. After that, it was either Jim Henson or Frank Oz. And I would have liked to have been in one of those, because those sets were very harmonious. But this was not."[1]

The Muppet Movie uses meta-references as a source of humor, as characters occasionally break the fourth wall to address the audience or comment on their real-life circumstances:

Fozzie [to Big Bird]: "Hey, there! Wanna lift?"
Big Bird: "Oh, no thanks. I'm on my way to New York City to try to break into public television."

(This refers to Big Bird's future "career" on Sesame Street.)

In a particularly meta-fictional plot twist, Kermit and Fozzie actually give the screenplay to Dr. Teeth, who later uses it to find and rescue them after they have been stranded in the desert.

To perform Kermit static on a log, Jim Henson squeezed into a specially designed metal container complete with an air hose (to breathe), a rubber sleeve which came out of the top to perform Kermit and a monitor to see his performance, and placed himself under the water, log, and the Kermit puppet. He was also assisted in this operation by Kathryn Mullen and Steve Whitmire. This scene took five days to film.

Before this, no movie had a hand puppet act with its entire body appearing onscreen. That is, hand puppets were only seen from the waist up, and it became a major plot point to show Kermit with legs. To have Kermit ride a bicycle in a full-body shot, a Kermit doll with legs was posed onto the seat and his legs and arms were attached to the pedals and handlebars. An overhead crane with a marionette system held the bicycle through strong strings invisible to the camera, guiding the bicycle forward. The crane and system was out of the camera's frame of vision.

Other shots required Muppets standing and acting in a full-body shot. Specially-made, remote-controlled dolls were placed on the set and controlled by puppeteers out of the frame. A dancing Kermit and Fozzie Bear were operated by their usual puppeteers in front of a blue screen, and were composited onto a separate reel of the stage. Both of these effects and the bicycle effect would be used again, and refined, in the next Muppet films.

Several classic cars were specially selected by Henson for appearances in the film. The most famous was a pair of psychedelic painted 1951 Studebaker Commander Coupes. In the film, Fozzie states that he inherited the car from his uncle. When asked by Kermit if his uncle is dead, Fozzie replies "no, he's hibernating". One car was painted but unmodified and driven by a person in the front seat. It was used for long, traveling shots. The second car was driven by a person in the trunk, who viewed the road through a TV set. The TV received its image from a camera located in the center nose of the car's front grill. This made it possible for Frank Oz to sit in the front seat and portray Fozzie driving the car in close up shots. This car is now on display at the Studebaker Museum in South Bend, Indiana.

Doc Hopper is chauffeured throughout the movie by Max in a 1959 Cadillac Fleetwood Limousine. The 1959 is distinctive for its enormous fins.

The final car driven by the Muppets is a 1946 Ford 'Woody' Station Wagon, which is famous for its wood panel siding and is a valuable collectible.

The film sold over 30.5 million tickets and grossed $76,657,000 domestically (adjusted for inflation, this would equal $242,492,661 in 2012 dollars), making it the seventh highest-grossing picture of 1979 and also, the second highest-grossing Muppet film after the release of The Muppets in 2011.[3] The success of the film gave Jim Henson Productions an opportunity to release more Muppet productions theatrically.

The Muppet Movie opened on June 22, 1979 to positive reviews. As of February 1, 2012, the film holds an 90% "Certified Fresh" rating on Rotten Tomatoes, based on 40 reviews and a 67/100 rating, which indicates "generally favorable reviews", at Metacritic.[4] Roger Ebert gave it three-and-a-half out of four stars. In his favorable review, he was fascinated that "The Muppet Movie not only stars the Muppets but, for the first time, shows us their feet."[5]

In 2009, it was named to the National Film Registry by the Library of Congress for being “culturally, historically or aesthetically” significant and will be preserved for all time.[6]

The film was first released on DVD by Sony Pictures on June 5, 2001 and again by Walt Disney Pictures on November 29, 2005 as Kermit's 50th Anniversary Edition. Walt Disney Studios Home Entertainment re-issued the 2005 release in stock along with other Disney-owned Muppet films as part of the 2011 film's promotion. There is also special – short 17 min. version of the film released by Walton Super 8 Home Movies. The version is in colour and sound.

Walt Disney Studios Home Entertainment will release The Muppet Movie on Blu-ray in 2013.[9]

The film's soundtrack was released by Atlantic Records in 1979, and on CD by Jim Henson Records in March 1993. The songs were written by Paul Williams and Kenny Ascher. Williams recalled to Songfacts: "Jim Henson gave you more [creative] freedom than anybody I've ever worked with in my life. I said, 'You want to hear the songs as we're writing them?' He said, 'No. I'll hear them in the studio. I know I'm gonna love them.' You just don't get that kind of freedom on a project these days."[10]

"Movin' Right Along", "Never Before, Never Again" and "I Hope That Somethin' Better Comes Along" were shortened in the film, compared to their soundtrack versions, for continuity purposes. The latter, a duet between Rowlf and Kermit, contained references that the studio considered too mature for children. In "Finale: The Magic Store", a line performed by Kermit in the film is sung by Fozzie on the soundtrack recording.

The Muppet Movie: Original Soundtrack Recording features the songs from the film, written by Paul Williams and Kenny Ascher. This album reached #32 on Billboard's Top LP's and Tapes chart in 1979, and was certified Gold by the RIAA. Several of the songs were included in The Muppet Show: Music, Mayhem, and More – The 25th Anniversary Collection released in 2002.