watch 01:38
The Loop (Movies)
Do you like this video?
The NeverEnding Story 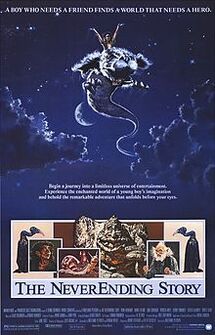 The NeverEnding Story (German: Die unendliche Geschichte) is a 1984 epic fantasy film based on the novel of the same name by Michael Ende, about a boy who reads a magical book that tells a story of a young warrior whose task is to stop a dark force called the Nothing from engulfing a mystical world. The film was produced by Bernd Eichinger and Dieter Giessler and directed and co-written by Wolfgang Petersen (his first English-language film) and starred Noah Hathaway, Barret Oliver, Tami Stronach, Patricia Hayes, Sydney Bromley, Gerald McRaney, Moses Gunn, and Alan Oppenheimer as the voices of both Falkor and Gmork (as well as other characters). At the time of its release, it was the most expensive film produced outside the United States or the Soviet Union. The film was the first in The NeverEnding Story film series and later followed by two sequels.[1]

Ende felt that this adaptation's content deviated so far from the spirit of his book that he requested that production either be halted or the film's title be changed; when the producers did neither, he sued them and subsequently lost the case.[2] Ende called the film a "gigantic melodrama of kitsch, commerce, plush and plastic" [Ein "gigantisches Melodram aus Kitsch, Kommerz, Plüsch und Plastik"].[3] The film only adapts the first half of the book, and consequently does not convey the message of the title as it was portrayed in the novel. The second half of the book would subsequently be used as the rough basis for the second film, The Next Chapter. The third film, Escape from Fantasia, features a completely original plot.

Bastian Balthazar Bux is a shy and outcast bibliophile ten-year-old, teased by bullies from school. On his way to school, he hides from the bullies in a bookstore, interrupting the grumpy bookseller, Mr. Coreander. Bastian asks about one of the books he sees, but Mr. Coreander advises against it. With his curiosity piqued, Bastian seizes the book, leaving a note promising to return it, and hides in the school's attic to read.

The book describes the Fantasy world of Fantasia slowly being devoured by a malevolent force called "The Nothing". Fantasia's ruler, the Childlike Empress, has fallen ill, and Atreyu is tasked to discover the cure, believing that once the Empress is well, the Nothing will no longer be a threat. Atreyu is given a medallion named the Auryn that can guide and protect him in the quest. As Atreyu sets out, the Nothing summons Gmork, a vicious and highly intelligent wolf-like creature, to kill Atreyu.

Atreyu's quest directs him to the adviser Morla the Ancient One in the Swamps of Sadness. Though the Auryn protects Atreyu, his beloved horse Artax is lost to the swamp, and he continues alone. Later, Atreyu is surprised by the sudden appearance of Morla, a giant turtle. Bastian, reading, is also surprised and lets out a scream, which Atreyu and Morla appear to hear. Morla does not have the answers Atreyu seeks, but directs him to the Southern Oracle, ten thousand miles distant. Atreyu succumbs to exhaustion trying to escape the Swamps but is saved by the luckdragon Falkor. Falkor takes him to the home of two gnomes that live near the entrance to the Southern Oracle. The gnomes explain that Atreyu will face various trials before reaching the Oracle. Atreyu proceeds to enter the Oracle, and is perplexed when one second trial, a mirror that shows the viewer's true self, reveals a boy which Bastian recognizes as himself. Bastian throws the book aside, but after catching his breath, continues to read. Atreyu eventually meets the Southern Oracle who tells him the only way to save the Empress is to find a human child to give her a new name, beyond the boundaries of Fantasia.

Atreyu and Falkor flee before the Nothing consumes the Southern Oracle. In flight, Atreyu is knocked from Falkor's back into the Sea of Possibilities, losing the Auryn in the process. He wakes on the shore of the abandoned ruins, where he meets Rock Biter, who laments the loss of his friends. Atreyu finds a series of paintings depicting his quest. Gmork reveals himself, having been lying in wait and explains that Fantasia represents humanity's imagination, and that the Nothing represents adult apathy and cynicism against it. Atreyu fends off and kills Gmork as the Nothing begins to consume the ruins. Falkor, who had managed to locate the Auryn, rescues Atreyu in time. The two find themselves in a void with only small fragments of Fantasia remaining, and fear they have failed when they spot the Empress's Ivory Tower among the fragments. Inside, Atreyu apologizes for failing the Empress, but she assures him he has succeeded in bringing to her a human child who has been following his quest: Bastian. As the Nothing begins to consume the Tower, the Empress pleads directly to Bastian to call out her new name, but in total amazement that he himself has been incorporated into the story as the child they were looking for, totally denies the events as just being a story and Atreyu dies as a result. Bastian runs to the window and calls out the name he had selected into the storm (Moonchild), and loses consciousness.

When he wakes, he finds himself in blackness with the Empress, with only a grain of sand, the last bit of Fantasia remaining. The Empress tells Bastian that he has the power to bring Fantasia back with his imagination using the power of the Auryn. Bastian re-creates Fantasia, and as he flies on Falkor's back, he sees the land and its inhabitants restored, and that Atreyu has been reunited with Artax. When Falkor asks what his next wish will be, Bastian then brings Falkor back to the real world to chase down the bullies from before. The film ends with the narration that Bastian had many more wishes and adventures, and adds: "but that's another story".

The adaptation only covered the first half of the book. The majority of the film was shot at the Bavaria Studios in Munich, except for the street scenes and the school interior in the real world, which were shot in Vancouver, Canada (the Gastown steam clock can be seen in the bully chase scene near the beginning[5]),[6] and the beach where Atreyu falls, which was filmed at Monsul Beach in Almería (Spain). It was Germany's highest-budgeted film at the time.

The film score of The NeverEnding Story was composed by Klaus Doldinger of the German jazz group Passport. The theme song of the North American release of the film was composed by Giorgio Moroder with lyrics by Keith Forsey, and performed by Christopher "Limahl" Hamill, once the lead singer of Kajagoogoo, and Beth Anderson. It was released as a single in 1984, it peaked at No. 4 on the UK singles chart, No. 6 on the US Billboard Adult Contemporary chart, and No. 17 on the Billboard Hot 100. The song has been covered by The Birthday Massacre, Creamy, Dragonland, Kenji Haga, and New Found Glory. More recent covers were done by Norwegian synthpop group Echo Image on their 2001 maxi-single Skulk and by German techno group Scooter on their 2007 album Jumping All Over the World. This Limahl song, along with other "techno-pop" treatments to the soundtrack, is not present in the German version of the film, which features Doldinger's orchestral score exclusively.

An official soundtrack album was released featuring Doldinger's score and Moroder's theme tune (Moroder also rescored several scenes for the version released outside Germany).[7] The track listing (Doldinger is responsible for everything from track 6 onwards) is as follows:

In Germany, an album featuring Doldinger's score was released.

Film critic Roger Ebert gave it three out of four stars and praised its visual effects, saying that "an entirely new world has been created" because of them,[17] a comment echoed by Variety.[1] Joshua Tyler of CinemaBlend referred to it as "One of a scant few true Fantasy masterpieces".[15]

Vincent Canby panned the film as a "graceless, humorless fantasy for children" in a 1984 New York Times review. Canby's criticism charged that parts of the movie "sounded like 'The Pre-Teenager's Guide to Existentialism'". He further criticized the "tacky" special effects, and that the construction of the dragon looked like "an impractical bathmat".[18]

The film performed poorly at the box office, grossing $20,158,808 at the US box office[19] against a production budget of DM60 million (approximately US$27 million at the time). Almost five million people went to see it in Germany, a number rarely achieved by German productions, resulting in a gross of about US$20 million domestically. It also grossed a similar amount in the United States; only a modest sum in the American market, which director Wolfgang Petersen ascribed to the film's European sensibilities.[20]

The film was released by Warner Bros. on LaserDisc with a digital stereo soundtrack in 1985.

A widescreen laserdisc was released on 28 August 1991; no special features were included.

The Region 1 DVD was first released in 2001 by Warner Bros, containing only the North American release of the film. The only audio option is a 2.0 stereo mix in either English or Spanish. The theatrical trailer is the lone extra feature presented.

There is also a quite lavish 2003 European version, which is a two-disc special edition with packaging shaped like the book from the film and containing both the North American and German releases of the film. Various extras, such as a 45-minute documentary, music video, and galleries, are presented on the second disc.[21] However, there is no English audio for the German version of the film. This edition is currentlyTemplate:When? out of print. The standard single-disc edition is also available for the Region 2 market.

A Dutch import has also appeared on the Internet in various places, which only contains the North American release of the film but also includes a remastered DTS surround track, which is not found in either the German or the Region 1 release.

Also, in 2008, Czech- and Slovak-language DVD versions appeared in Czech Republic and Slovakia.

The first Blu-ray release was a region-free Dutch edition on 24 March 2007.

On 7 October 2014, a 30th Anniversary Edition Blu-ray was released, which duplicates the DTS surround track of its predecessor. Originally described as a "newly" remastered version of the film, Warner released a statement indicating that "the only remastered version is The NeverEnding Story II", while not elaborating further on this current US release.[23] The 30th Anniversary Edition contains the original theatrical trailer, a commentary track by director Wolfgang Petersen, documentaries and interviews from both 1984 and 2014, and a German-language/English-subtitled feature detailing the digital restoration process of the film.

The film has since been an inspiration in popular culture.

In 2009, it was reported that Warner Bros., The Kennedy/Marshall Company and Leonardo DiCaprio's Appian Way were in the early stages of creating another adaptation of Ende's novel. They intend to "examine the more nuanced details of the book" rather than remake the original film by Petersen.[24]

In 2011, producer Kathleen Kennedy said that problems securing the rights to the story may mean a second adaptation is "not meant to be."[25]

Image:Commons-logo.svg|left|50px|
Wikimedia Commons has media related to:
The NeverEnding Story

Wikiquote has a collection of quotations from or about:
The NeverEnding Story
Retrieved from "https://movies.fandom.com/wiki/The_NeverEnding_Story?oldid=278585"
Community content is available under CC-BY-SA unless otherwise noted.