View src
watch 01:33
Wiki Targeted (Entertainment)
Do you like this video?
Play Sound
The Nice Guys 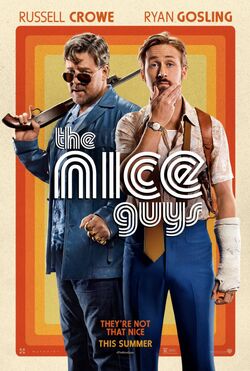 The Nice Guys is a 2016 American mystery comedy film directed by Shane Black and written by Black and Anthony Bagarozzi. It stars Russell Crowe, Ryan Gosling, Angourie Rice, Matt Bomer, Margaret Qualley, Keith David and Kim Basinger. The film premiered on May 15, 2016, at the 2016 Cannes Film Festival. It was released on May 20, 2016 by Warner Bros. Pictures.

Holland March (Ryan Gosling) is a down-on-his-luck private eye in 1977 Los Angeles. Jackson Healy (Russell Crowe) is a hired enforcer who hurts people for a living. Fate turns them into unlikely partners after a young woman named Amelia (Margaret Qualley) mysteriously disappears. Healy and March soon learn the hard way that other dangerous people are also looking for Amelia. Their investigation leads to some dark places as anyone else who gets involved in the case seems to wind up dead.

Mike Ryan of Uproxx gave the film a positive review, praising Black's writing, saying: "If you like Shane Black, you will like The Nice Guys. It’s probably the Shane Black-est of all the Shane Black movies. Black has a knack for turning action movie expectations on their head mixed with knowing and rich dialogue." IGN gave the film a 9/10, writing, "Working from a tight and sharp script that perfectly balances the characters like a yin and yang of screw-ups ensures The Nice Guys is an absolute joy every step of the way."