Start a Wiki
watch 16:45
The Loop (Movies)
Do you like this video?
The Nightingale 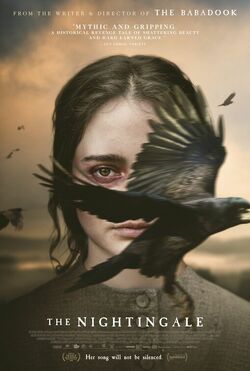 Set in Tasmania in 1825, Clare, a 21-year-old Irish convict (Aisling Franciosi), witnesses the brutal murder of her husband and baby by Hawkins, a British officer (Sam Claflin), and his cronies. Unable to find justice, she takes Billy, an Aboriginal tracker (Baykali Ganambarr), with her through the hellish wilderness to seek revenge on the soldiers, and gets much more than she bargained for.

Retrieved from "https://movies.fandom.com/wiki/The_Nightingale_(2018)?oldid=174872"
Community content is available under CC-BY-SA unless otherwise noted.