View src
watch 01:33
Wiki Targeted (Entertainment)
Do you like this video?
Play Sound
The Nun 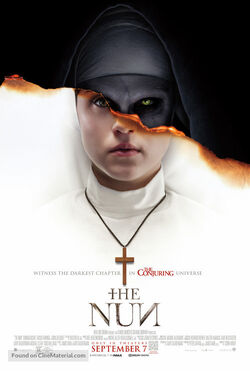 The film was initially scheduled to release on July 13, 2018. In February 2018, a report by Deadline stated that the film would now release on September 7, 2018.

It serves as the fifth entry in The Conjuring series.

In 1952 Romania, two Roman Catholic nuns living at the Cârța Monastery are attacked by an unseen force when they enter a tunnel to retrieve an ancient Christian relic. The surviving nun, Sister Victoria, flees from the attacker, a demon appearing as a nun, and hangs herself. Her body is discovered by Frenchie, a villager who transports supplies to the nuns.

The Vatican learns of the incident and summons Father Burke to Rome, where they ask him to travel with Sister Irene, a nun in her novitiate, to Romania in order to investigate the situation. While Sr. Irene is teaching children the relationship between religion and science in a school, her Mother Superior interrupts her and informs her that Burke has arrived in order to request Irene's accompaniment in his trip to Romania.

The pair travel to Romania and meet with Frenchie, who leads them to the abbey. They discover Victoria's body and remove a key from her corpse. Inside, they encounter the Abbess, who informs them that the nuns observe a period of silence during the night and offers them lodging at the attached convent if they wish to return the next day. Frenchie is attacked by a demon as he returns to the village, but escapes. Burke tells Irene that a boy he exorcised, Daniel, was fatally injured during the exorcism, and Burke has been saddened by the boy's death with him ever since. Irene reveals that as a girl, she had visions particularly of a nun, causing the Church to take an interest in her. Burke is rescued by Irene after being buried alive in the graveyard by the demonic entity.

The next day, Irene and Burke return to the abbey, but only Irene can enter as it is cloistered. She meets some of the other nuns and learns that they are praying constantly, swapping in shifts, to keep the entity at bay. Sister Oana reveals the abbey's history: it was built as a castle by a duke who was obsessed with the occult. The duke summoned the demonic entity through a rift in the catacombs but was killed by Christian knights, who sealed the rift with an artifact containing the blood of Jesus Christ. The bombings during the Second World War caused the rift to open again, unleashing the entity. Burke identifies the entity as Valak from a book. He discovers the Abbess has been dead all along.

Frenchie heads back to the abbey to help Irene and Burke. Irene is attacked by Valak and joins the nuns in desperate prayer to fend off the demon. When the group reunites, Irene discovers that none of the nuns she had seen and talked to were real and she had been praying alone. Irene realizes that Victoria had been the last nun in the abbey and had sacrificed herself to stop Valak from possessing her body and unleashing evil.

Theorizing that Valak can only be stopped if they seal the rift with the blood of Christ contained in the reliquary, the trio retrieves the vial with the key Victoria had. Irene then informs Burke that God has called her to make her solemn vows as a nun and asks Burke to elevate her to the status of a professed nun, which he does in the abbey's chapel.

Twenty years later at a university seminar, Carolyn Perron watches as Ed and Lorraine Warren present footage of their attempt to exorcise a possessed Maurice. Maurice grabs Lorraine, giving her visions of Ed dying, which initiate the Warrens' investigation of the Perron household haunting, as well as their encounter with Valak itself.