Start a Wiki
The Nutcracker and the Four Realms 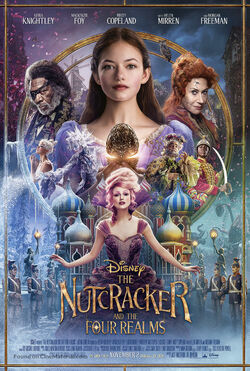 In Victorian London, England on Christmas Eve, Mr. Stahlbaum gives his children the Christmas presents his wife Marie had set aside for them before she died. The younger daughter, Clara, receives a handcrafted egg-shaped box, which she is unable to unlock. In the package, she discovers a note from her mother that states that the inside of the egg is all she would ever need. The Stahlbaum family then heads to a Christmas Eve ball, hosted by the children's godfather and skilled engineer Drosselmeyer. Refusing to dance with her father, Clara scurries from the crowd to ask Drosselmeyer how to unlock her egg. He then reveals to Clara that the egg was a creation of his that he gifted to Clara's mother when she was younger, and that her mother's wish was to bestow the gift to her daughter.

Returning to the ballroom, Clara gets scolded by her father for disobeying him and not dancing with him. She calls him self-absorbed and obsessed with his family's image since her mother's passing, after which Drosselmeyer announces it being time for the children to receive their gifts. Clara finds her string with her name on it, signifying her gift, and follows it into a forest in a parallel world where she sees the key. Before she can grab it, a mouse snatches it. Unable to reach the mouse, which crosses a frozen-over lake, Clara approaches Captain Philip Hoffman the Nutcracker. He leads her across the bridge into the Fourth Realm, but they are unable to obtain the key from the mice. Captain Philip then guides Clara to the palace, where she meets three regents of each land. They tell Clara that they are at war with the Land of Amusements which they now refer to as "the Fourth Realm".

Watching a ballet that tells the story of their world's creation, the Sugar Plum Fairy, regent of the Land of Sweets, explains to Clara that her mother created this world as a young girl. She later explains that Marie animated everyone with a machine that can turn toys into real-life people. Sugar Plum says that she can use this machine to defend the other three realms against Mother Ginger, the Regent of the Fourth Realm, but it needs a key. Clara notices that the machine's keyhole matches that of the one on her egg. Clara and her soldiers head towards Mother Ginger and steal the key the mouse had snatched. However, Clara is disappointed upon discovering that the egg is only a music box.

Once Sugar Plum obtains the key, she uses the machine to turn toy soldiers into life-size soldiers that obey her every command, including her command to attack the Fourth Realm. When Clara suggests using the soldiers to defend them from the Fourth Realm, Sugar Plum reveals that she had lied about Mother Ginger who, with her people, resisted against Sugar Plum's plan of taking over all four realms in revenge for being abandoned by Marie and that the machine can turn this world's people back into toys as well, intending that to be the fate of the other regents who resist her. Sugar Plum then imprisons Clara, Captain Philip, Shiver, and Hawthorne.

When Clara opens her egg-shaped music box again, she discovers that the top flips up to reveal a mirror, illustrating that all she needed was herself. She and the other prisoners escape and she and Captain Philip are then greeted by one of Mother Ginger's mice who shows Clara another way into the machine room and guides Captain Philip to Mother Ginger to convince her to help Clara overthrow Sugar Plum. Clara enters the machine room and shuts down the machine while fighting off soldiers. Mother Ginger comes to her aid and helps her to fight off the soldiers. Sugar Plum ultimately traps Mother Ginger and attempts to turn her back into a toy with the machine. However, Clara tinkers with the machine so that it aims at Sugar Plum, which zaps her and turns her back into a porcelain doll for high treason to the Realms while saving Mother Ginger.

Thanked for restoring peace among the Realms, Clara promises to visit the Realms in the future and returns back to London, where time has hardly passed since she left. She then approaches her father, apologizes for her earlier behavior, and asks him to dance. He accepts, and Clara opens her music box. Clara's father becomes emotional and reveals that the music box's song was the first song that he and Clara's mother had ever danced to. The two then continue to dance throughout the night.

Retrieved from "https://movies.fandom.com/wiki/The_Nutcracker_and_the_Four_Realms?oldid=151801"
Community content is available under CC-BY-SA unless otherwise noted.