watch 01:45
The Loop (Movies)
Do you like this video?
Play Sound
The Nutty Professor 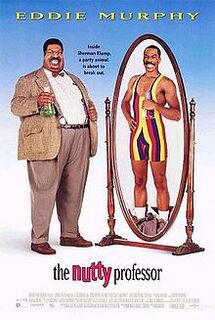 The Nutty Professor is a 1996 live action comedy film produced by Universal Studios and Imagine Entertainment. It stars Eddie Murphy as a college science teacher who makes his dreams come true once taking a weight-loss potion. It was a success at the box office, but a 50/50 decision with critics.

A sequel was made called The Nutty Professor II: The Klumps in 2000.

At the fictional Wellman College, thousands of hamsters are overrunning the entire campus, causing general chaos. This is due to Professor Sherman Klump (Eddie Murphy) accidentally releasing them by grazing the switch that opens the hamster’s cages. Meanwhile, Sherman has constructed an experimental formula that reconstructs the DNA of an obese person in a way that will allow them to lose weight more easily.

After class, Sherman meets and instantly falls in love with Carla Purty (Jada Pinkett), a chemistry graduate student who is a big fan of his work. After dinner with his obese, impolite family (most of whom are also portrayed by Murphy), Sherman asks Carla out on a date, which she accepts, much to Sherman's pleasant surprise. At the date, it begins well with Carla showing admiration for Sherman’s work, but Sherman falls victim to the club’s insult comic Reggie Warrington (Dave Chappelle), who attacks him with cruel jokes about his obesity. At home, completely depressed, he has a nightmare in which he becomes a giant and lays waste to the city with just a single fart, which is then accidentally lit on fire. When he awakens, he yields to the temptation to try the serum on himself. It works, as he loses 250 pounds in seconds; he also develops a split personality as the high testosterone levels causes him to be overly assertive and confident.

Dubbing himself Buddy Love (also portrayed by Murphy), he invites Carla back to the club where they dated. Reggie is present again, and Buddy heckles him mercilessly (largely by targeting Reggie's "mama" with fat jokes similar to the ones Reggie pelted him with); then stuffs him into a grand piano. The next morning, Dean Richmond (Larry Miller) has set up a meeting with Harlan Hartley (James Coburn) at The Ritz to have Sherman describe the serum. Sherman arrives at The Ritz as Buddy Love with Carla. When the dean spots him, Carla asks Buddy if he will take Sherman's place. He does, and he takes all the credit of his work to Hartley. Hartley and the dean are very impressed with his work, and the dean invites him to the alumni ball.

After a falling out with Carla, and Richmond gleefully telling Sherman that Buddy will be taking his place at the Alumni Ball. Sherman, having enough of his alter ego, destroys all of the serum samples, but transforms into Buddy again after sipping a diet drink that Buddy has filled with the serum. Sherman’s young assistant Jason (John Ales) tries to stop him from going to the ball, but Buddy knocks him out and departs. At the ball, Buddy demonstrates the effects of the serum to the audience, but Jason arrives in time, as he has found out that Buddy’s testosterone levels are at a lethally high 60,000%. The two of them get into a brief fist fight, but Sherman begins to fight Buddy from within. Sherman eventually transforms into his regular self and tells the alumni that he was wrong for what he did, that Buddy was who he thought he (and everybody else) wanted him to be, and that he should accept himself for who he is. As he leaves, Carla stops him and asks why he lied; he says he did not believe that she would accept him, but she says it doesn’t matter if he is overweight or not. The film ends with Sherman and Carla dancing, and Hartley giving the grant to Sherman because he is "a brilliant scientist and a gentleman."

Retrieved from "https://movies.fandom.com/wiki/The_Nutty_Professor_(1996)?oldid=170995"
Community content is available under CC-BY-SA unless otherwise noted.