watch 01:56
The Loop (Movies)
Do you like this video?
Play Sound
The Oath 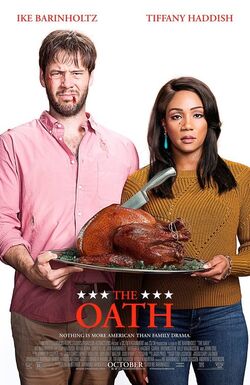 When Chris, a high-strung news junkie, and his more levelheaded wife learn that citizens are being asked to sign a loyalty oath to the president, their reaction is disbelief. As the Thanksgiving deadline to sign approaches, the combination of sparring relatives, Chris' own agitation and the unexpected arrival of two government agents sends an already tense holiday gathering completely off the rails.

Retrieved from "https://movies.fandom.com/wiki/The_Oath?oldid=165310"
Community content is available under CC-BY-SA unless otherwise noted.