Start a Wiki
watch 01:32
The Loop (Movies)
Do you like this video?
The Other Guys 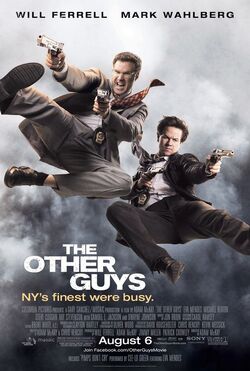 The film was released in the United States on August 6, 2010 by Columbia Pictures.

Unlike their heroic counterparts on the force, desk-bound NYPD detectives Gamble (Will Ferrell) and Hoitz (Mark Wahlberg) garner no headlines as they work day to day. Gamble relishes his job as a paper pusher, but Hoitz is itching to get back on the street and make a name for himself. When a seemingly minor case turns out to be a big deal, the two cops get the opportunity to finally prove to their comrades that they have the right stuff.

Retrieved from "https://movies.fandom.com/wiki/The_Other_Guys?oldid=164009"
Community content is available under CC-BY-SA unless otherwise noted.