watch 00:59
The Loop (Movies)
Do you like this video?
The Pagemaster 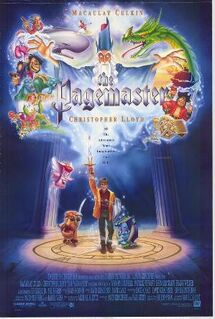 The film was produced by Turner Pictures and released by 20th Century Fox on November 23, 1994.

Pessimistic Richard Tyler (Macaulay Culkin) lives life based on statistics and fears everything. His exasperated parents (Ed Begley, Jr. and Mel Harris) have tried multiple ways to build up the courage of their son, but to little success.

Richard is sent to buy a bag of nails for building a treehouse. However, he gets caught in a harsh thunderstorm and takes shelter in a library. He meets Mr. Dewey (Christopher Lloyd), an eccentric librarian who gives him a library card despite Richard's protests he doesn't want a book since he's only there to escape the storm.

Searching for a phone, Richard finds a large rotunda painted with famous literary characters. He slips on some water dripping from his coat and falls down, knocking himself out. Richard awakens to find the rotunda art melting, which washes over him and the library, turning them into illustrations. He is met by the Pagemaster (Christopher Lloyd), who sends him through the fiction section to find the library's exit.

Along the way, Richard befriends three anthropomorphic books: Adventure (Patrick Stewart), a swashbuckling gold pirate-like book; Fantasy (Whoopi Goldberg), a sassy but caring lavender fairy tale book; and Horror (Frank Welker), a fearful turquoise "Hunchbook" with a misshapen spine. The three agree to help Richard if he checks them out.

Together, the quartet encounter classic-fictional characters. They meet Dr. Jekyll (Leonard Nimoy) who turns into Mr. Hyde, driving them to the open waters of the Land of Adventure. However, the group is separated after Moby-Dick attacks, following the whale's battle with Captain Ahab (George Hearn).

Richard and Adventure are picked up by the Hispaniola, captained by Long John Silver (Jim Cummings). The pirates go to Treasure Island, but find no treasure, nearly causing a mutiny. Fantasy and Horror return and defeat the pirates.

Silver attempts taking Richard with him, but surrenders when Richard threatens him with a sword. As Adventure insulted Horror, it caused the hunchbook to get captured by Lilliputians from Gulliver's Travels. Adventure saves him and they make up.

In the fantasy section, Richard sees the exit sign on the top of a mountain. However, Adventure's bumbling awakens a dormant dragon. Richard tries to fight the dragon with a sword and shield, but the dragon wraps its tail around him and shakes his armor and weapons off, throws him into the air and swallows him.

Richard finds books in the dragon's stomach and uses a beanstalk from the Jack and the Beanstalk to escape. He and the books use it to reach the exit. They enter a large dark room where the Pagemaster awaits them.

Richard berates the Pagemaster for the horrors that he suffered, but the Pagemaster reveals the journey was intended to make Richard face his fears. Dr. Jekyll, Captain Ahab, Long John Silver and the dragon reappear in a magical twister congratulating him. The Pagemaster then swoops Richard and the books into the twister, sending them back to the real world.

Richard awakens, finding Adventure, Fantasy and Horror next to him as real books. Mr. Dewey finds him (and even though the library policy only allows a person to check out two books at time), he lets him check out all three books "just this once."

When Richard leaves, Mr. Dewey gives a smile, hinting that Richard's entire adventure was not a dream and that he is the Pagemaster; adding onto this possibility is that Richard was missing his jacket when he awoke.

Richard returns home a braver kid, sleeping in his new treehouse. Adventure, Fantasy, and Horror appear as silhouettes on a wall, and Fantasy creates a "night light." Adventure says a kiss would make the ending good, yelling in anger when Horror does so instead of Fantasy.

The Pirates of the Hispaniola are voiced by Richard Erdman, Fernando Escandon, Dorian Harewood, and Robert Picardo.

"The Pagemaster" took three years to produce; the animation in the film was produced by Turner Feature Animation, headed by David Kirschner and recently spun off from Hanna-Barbera Cartoons.

The crew included animators who were veterans of productions such as An American Tail (also produced by David Kirschner and composed by James Horner), The Land Before Time and Aladdin.

This was one of the first films to feature live-action, traditional animation and CGI animation all together. One scene involving a computer-generated dragon made from paint was used, a challenge for the filmmakers.

All of the fictional works featured in the film were created and first published before January 1, 1923, making them a part of the public domain in most countries.

The theme songs to the movie are "Dream Away" (sung by Babyface and Lisa Stansfield) and "Whatever You Imagine" (sung by Wendy Moten).

The promotional advertisements for this film used the theme from the 1984 film The Last Starfighter.

Casci's original screenplay included a story arc for the protagonist, Richard Tyler (played by Macaulay Culkin), who begins the tale as a boy who hates reading, but by the end of the film, learns to love reading. The revised screenplay by Contreras and Kirschner omitted the reading-themed story arc, instead emphasizing the boy's journey from cowardice to courage.

According to the film's animation crew, the film went overbudget during animation production due to mismanagement and changes to the narrative.

The 2001 book "Producing Animation" by Catherine Winder and Zahra Dowlatbadi (Johnston's assistant on "The Pagemaster") recommends against making story changes during the animation process.

Fantasy and Long John Silver are voiced by Whoopi Goldberg and Jim Cummings. The two of them (along with Cheech Marin) voiced the three troublesome hyenas in The Lion King, another animated film released the same year.

Animation production began in August 1992 and the live-action scenes were filmed from September 21 to October 15, 1992. After two years in the making, the film was completed and wrapped in the summer of 1994.

According to the copyright holder, it was believed to be made in 1993 (although the film was just released a year later).

The screenwriting credits for this film were the subject of a protracted legal arbitration with the Writers Guild of America (WGA) when its producer, David Kirschner, attempted to claim sole authorship of the screenplay and original story with no credit for its original screenwriter, David Casci.

Typically, proposed credits are submitted to the WGA for approval well in advance of the release of a movie or the publishing of posters or novelizations on which writing credits appear.

In the case of "The Pagemaster", the producers attempted to claim that, as the film was now largely animated, the WGA did not have jurisdiction to determine credits.

Casci had written the screenplay under a WGA contract, as well as previous live-action versions for Disney Television dating back to 1985 (also written under WGA contract). These facts positioned the WGA to get involved, testing their tenuous authority over a feature film with animated elements.

After a lengthy investigation and interviews with those intimately familiar with the genesis of the Pagemaster project, including three persons within Kirschner's own office, the WGA credit arbitration process determined that David Casci was, in fact, the primary writer, and that Kirschner did not provide a sufficient creative contribution to the writing process to warrant any screenwriting credit.

Upon receiving this determination by the WGA, Fox threatened to pull out of arbitration and release the film without WGA-approved credits, positioning the WGA to be forced to file an injunction blocking the film's heavily promoted Christmas season release.

At the time, this case was the most expensive and extensive investigation of its type undertaken by the WGA on behalf of one of its members.

"The Pagemaster" is presented in an extended cut version.

During the production, some original scenes were removed, both live-action and animation. The deleted scenes and characters can be still seen during the making of the film, trailers and TV spots, SkyBox International trading cards, books and other related products.

The film received an 18% score on Rotten Tomatoes.

Roger Ebert of the Chicago Sun-Times criticized the way the film's message came across, calling it a "sad and dreary film," adding that its message seemed to be that "books can be almost as much fun as TV cartoons and video arcade games."

Brian Lowry of Variety said that the film's principal appeal for adults would be its abbreviated running time, and that it did not do enough with its famous fictional characters, noting, "A more inspired moment has Richard using a book, 'Jack and the Beanstalk,' to escape from the belly of a dragon. Unfortunately, such moments are few and far between."

Rita Kempley of The Washington Post, however, gave the film a positive review, calling it a "splendidly original children's fantasy about the world of books."

James Berardinelli of ReelViews gave another positive review, calling it a "clever, often engaging, and always fast-paced motion picture" that "uses the visual medium to encourage its viewers to reach out with their imagination."

Retrieved from "https://movies.fandom.com/wiki/The_Pagemaster?oldid=262788"
Community content is available under CC-BY-SA unless otherwise noted.