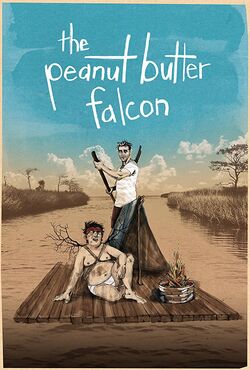 It had its world premiere at South by Southwest on March 9, 2019, and was released in the United States on August 9, 2019, by Roadside Attractions.

Zak, a 22-year-old man with Down syndrome, lives in a retirement home in North Carolina where he is cared for by Eleanor. He dreams of becoming a professional wrestler and attending the wrestling school of his hero, the Salt Water Redneck, whose videos he watches obsessively. After a failed escape attempt, Zak sneaks out of the home late at night with the assistance of his elderly roommate, Carl. He stows away on a small fishing boat for the night.

Meanwhile, Tyler, a troubled thief and fisherman, is turned away from selling his stolen crabs at the local crab shack because he does not have a license. As retaliation, he burns $12,000 worth of equipment on the docks and is pursued by local fishermen Duncan and Ratboy. Tyler steals the boat that Zak is hiding on and takes off. He discovers Zak on board and attempts to leave him behind once they reach shore; however, after he witnesses local teens harassing Zak. Tyler intervenes and allows Zak to come with him as long as he doesn’t slow him down, and promises to accompany Zak to the wrestling school en route to his ultimate destination of Florida.

Duncan and Ratboy spread the word in their ongoing search for Tyler, while Eleanor searches for Zak. Eleanor and Tyler cross paths at a convenience store, where Tyler denies having seen Zak. During their travels Tyler teaches Zak how to swim and fire a gun, and encourages his self-confidence. During a river crossing they are nearly struck by a passing boat, and they encounter a blind religious man, who baptizes Zak and gives them supplies to make a raft to complete their journey down river. They celebrate that night by getting drunk on the beach, during which Zak invents a wrestling moniker for himself: The Peanut Butter Falcon.

The next morning, Eleanor discovers their camp, and attempts to persuade Zak to come back with her. Tyler convinces her to accompany them on their journey instead, which she agrees to on the condition that they’ll return to the home after reaching the wrestling school. They sail the Outer Banks of North Carolina, and Tyler and Eleanor argue over how much freedom Zak ought to have. That night, while taking shelter in a seaside shack, Duncan and Ratboy burn their raft and threaten to shoot one of Tyler’s hands. Zak uses Tyler’s shotgun to defend his friends.

The three arrive in the town where the wrestling school is located, and search for Salt Water Redneck's home. They discover the school has been closed for over a decade and the Redneck, now known as Clint, is no longer a wrestler. Zak is disappointed, but shakes Clint's hand and they leave. Eleanor learns that Zak will be transferred to a recovery home for drug addicts upon return, while Tyler wants Eleanor to come with him to Florida. They are approached by Clint, now dressed as the Salt Water Redneck, who was moved by Tyler’s speech earlier. He agrees to take on Zak as a protégé.

Clint trains Zak, and sets him up for a staged fight against a friend, Sam. Eleanor is alarmed by the violence on display and doesn’t want Zak to take part. Tyler and Elenor kiss but he uses the moment as a distraction to handcuff her to the steering wheel of a car to prevent her from intervening. A nervous Zak plays to the crowd as he enters the ring. Sam, who is envious of Zak’s reception, does not fight clean. Eleanor spots Duncan and Ratboy in the crowd. She free herself and warns Tyler. Zak overcomes his fear and throws Sam from the ring, winning the fight. Duncan gets close enough to strike Tyler with a crowbar as the fight ends.

At the hospital, Zak bursts into tears after learning of Tyler’s condition. Later, Eleanor, Zak, and Tyler, drive to Florida.

The film was first announced in June 2017, with Shia LaBeouf, Dakota Johnson and Bruce Dern announced for the film. In July 2017, the production was underway in Georgia, US. Later that month, John Hawkes, Jon Bernthal and Thomas Haden Church were added to the cast, with professional wrestlers Henry Keighley, Stelios Landrakis and rapper Yelawolf making an appearance in the film.

Retrieved from "https://movies.fandom.com/wiki/The_Peanut_Butter_Falcon?oldid=180092"
Community content is available under CC-BY-SA unless otherwise noted.