watch 00:59
The Loop (Movies)
Do you like this video?
The Possession of Hannah Grace 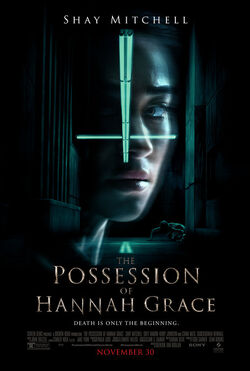 The Possession of Hannah Grace is a 2018 supernatural horror film directed by Diederik Van Rooijen. The cast of the film consists of Shay Mitchell, Grey Damon, Kirby Johnson, and Stana Katic.

The film opens as two priests are in the middle of an exorcism. Hannah Grace (Kirby Johnson) is possessed by an inhuman force, and her body painfully contorts. Her father Grainger (Louis Herthum) sits by her side as he desperately waits for the priests to do their work and pleads with Hannah to fight her demon. Suddenly, Hannah's body rises, and she appears to have a hold on the priests. She sends one flying against the wall where he is impaled through the head, while the other priest starts to choke. Grainger grabs a pillow and smothers Hannah until she stops moving.

Three months later in Boston, Megan Reed (Shay Mitchell) is heading to a job interview at Boston Metro Hospital. Her friend/AA sponsor Lisa (Stana Katic) has hooked Megan up with a job working the graveyard shift in the morgue as an intake assistant. She goes through an interview with Dr. Lewis (James A. Watson, Jr.), who shows her the ins and outs of the area and asks if she can handle the position since a lot of people have quit on him because they couldn't handle the solitude around corpses, as well as the smell. Megan assures Dr. Lewis that she can handle the job.

Megan starts later that evening. She meets two security guards at the front, Ernie (Jacob Ming-Trent) and Dave (Max McNamara) before heading into the morgue. She works until an EMT brings in a fresh body. In the middle of her work, Megan starts to get haunted by a recent traumatic memory. As she worked as a police officer, she was facing a perp and hesitated to shoot him until he turned around and fired his gun. The man shot and killed her partner then ran off. The guilt and horror of it led Megan to abuse pills, which landed her in rehab.

The next day, Megan is visited by her ex, a cop named Andrew (Grey Damon), who is there to pick up the rest of his stuff. He questions whether or not her new job is a good idea, and the two have a brief argument before Andrew decides to go home.

Megan returns to work that night and finds a hooded man (Grainger) standing outside asking to be let in. She rightfully doesn't trust him, and he starts to angrily order her to let him in until Megan threatens to call security on him. Moments later, an EMT named Randy (Nick Thune) shows up with the body of a young woman who was apparently being mutilated as she was found. Megan steps outside to help Randy, not seeing Grainger sneaking inside behind her. After Randy leaves, Megan inspects the body, which turns out to be Hannah. She tries to take pictures of the body, but the camera and computer don't work. Other weird things happen, like a tremor in the room, or the drawer with Hannah's body not staying shut. When she goes back to see the body, she notices flies around Hannah, and a whole swarm of them when she lifts off her sheets, but this turns out to be a hallucination...possibly.

Megan hears something outside and goes to check it out, but she finds nothing. She goes back into the morgue to find Hannah's body is gone, and she sees Grainger trying to take it away. She goes to confront him, and he tries to attack her with a knife, but Megan disarms him and waits for security to come get him. As Grainger is getting arrested, he yells to Megan that Hannah isn't really dead.

After Megan returns Hannah's body, she gets a call from Andrew to check up on her since he heard about the incident, though she doesn't notice Hannah's body moving. When Megan does get a look at Hannah, she sees her mouth open and exhale. She gets Lisa to meet with her now that she's freaked out. Lisa tells her she can go home if she wants, but Megan insists that she needs to do this. She tells Lisa about Hannah breathing, but Lisa says that corpses release air sometimes when they are moved.

Andrew goes to visit Megan, but he accuses her of taking a bottle of Xanax that he had. She gets angry that he would suggest that she is using again, and she orders him to get lost.

Dave tries to entertain himself when he hears something weird in the morgue. He goes to investigate and goes next to Hannah's drawer where he hears the noise. A powerful force then lifts him up on his feet and starts to painfully break his bones until it pulls him into the drawer. Meanwhile, Megan is in the bathroom when she sees a corroded hand reaching for something outside the stall. Growing more paranoid, Megan asks Ernie to view morgue footage. She sees Hannah crawling in the darkness from one of the cameras. Megan starts to look into Hannah's death and tells Lisa what she found out about it. Lisa later goes outside for a smoke but is stalked by Hannah. She is followed up to the rooftop where Hannah twists Lisa's body until her neck snaps.

Randy returns with a new body, and Megan has him come inside to see Hannah's body, which made its way back to the drawer. The body appears to be healing following the deaths of Dave and Lisa. Randy notices Megan isn't well and he tries to make an innocent assumption about her state of being, as he was in a similar position himself a while back. Randy then leaves, and Megan talks to Andrew on the phone regarding the Xanax bottle, saying that she didn't take it or use it, but he says it's okay. Outside, Hannah finds Randy and kills him, making it look like his head was smashed between the wall and his truck. Megan sees Hannah on the security footage and tries to go find Randy, but he's already dead.

Andrew calls Megan to tell her that Grainger killed the cops that were escorting him, and he's heading back to the hospital. When he does get there, he tells Megan what she has seen, that Hannah's body is healing itself with each kill, and that they need to completely destroy her body by burning it. Megan reluctantly helps Grainger bring the body to the incinerator, but Hannah takes hold of Grainger's body and forces him to the incinerator, killing him.

Andrew shows up to help Megan, who is trying to run from Hannah. Hannah catches Ernie and slits his throat before heading after Megan and Andrew. She starts to grab onto Andrew and twist him around, but Megan takes his gun and shoots Hannah until she drops to the floor. She lets Andrew out of hospital and take Hannah's body back to the incinerator where Hannah appears alive again. She attacks Megan, but she manages to shove Hannah into the incinerator, even as she starts pleading for Megan not to.

Sometimes later, Megan has recovered and is ready to move forward in life. After had a shower, she sees a fly on the mirror wall and swats it with her hand.

Retrieved from "https://movies.fandom.com/wiki/The_Possession_of_Hannah_Grace?oldid=148117"
Community content is available under CC-BY-SA unless otherwise noted.