watch 00:59
The Loop (Movies)
Do you like this video?
The Predator 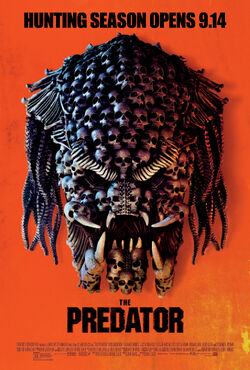 The Predator is an American science-fiction action film directed by Shane Black and written by Black and Fred Dekker. It is the fourth installment in the Predator film series, following Predator (1987), Predator 2 (1990) and Predators (2010). Black had a supporting role in the original film, while John Davis returns as producer from the first three installments.

A young boy accidentally triggers an alert that brings the Predators back to Earth. The universe’s most lethal hunters have genetically upgraded themselves with DNA from other alien species.

In June 2014, Fox announced a sequel which Shane Black, who also starred as supporting character Rick Hawkins in Predator, will direct and co-write with Fred Dekker, and John Davis will produce. Davis has said of the film that he thinks it is fresh and reimagines the franchise in a "different, interesting way". In February 2016, Black confirmed the title of the new sequel would be The Predator. Shane Black has referred to the project as an event film which aims to elevate the Predator series: "It's an attempt to 'event-ise' the Predator again... [An attempt to] make it more mysterious." Black also expressed that the film would mark a return to the "intimate" scale of the original film and that the film-makers hoped to achieve “the same sense of wonderment and newness that Close Encounters had when that came out.”

Black confirmed that the film is set in the present day and the titular character has upgraded armor. Black has also indicated that the film would be a sequel set in present-day 2018, following the events of Predator and Predator 2, but set prior to the events of the 2010 film Predators. He also mentioned that he looked for plot details set up in the previous Predator movies that he could retrospectively link back to with the new film. To that end, Jake Busey was cast as Sean Keyes, the son of Peter Keyes (a character who was portrayed by Busey's father Gary Busey in Predator 2). In February 2016, the studio revealed a teaser image of the film, confirming the title The Predator.

Martin Whist served as the film's production designer, while effects house Amalgamated Dynamics provided the creature effects for The Predator, having done so previously for the first two Alien vs. Predator films.

Chief-executive-officer of 20th Century Fox Stacey Snider talked a little about The Predator and her thoughts on Shane Black and Fred Dekker’s script:

We’ve got a Predator film coming out that is unexpected and utterly fresh. I just imagined that it would take 500 hours to read the script — that it would be interior jungle, exterior more jungle and then fighting happens, but Emma [Watts] went out and recruited Shane Black. From the first page, it didn’t read like a Predator film. It’s set in suburbia. There’s a little boy and his dad at the center of the action.

Arnold Schwarzenegger discussed with Black about returning to the film as his character after the first Predator film. Rapper 50 Cent also spoke of the possibility of being involved in the film but ended up dropping out. By September 2016, Benicio del Toro had signed on to star in the film. The following month, Boyd Holbrook replaced del Toro, who departed due to scheduling issues. In November 2016, Olivia Munn joined the cast. In January 2017, Trevante Rhodes, Keegan-Michael Key, Sterling K. Brown, Thomas Jane and Jacob Tremblay joined the cast. In February, Alfie Allen and Yvonne Strahovski were added to the cast. In March, the last main role was filled by Augusto Aguilera while Jake Busey was also cast in a supporting role.

In March 2017, Edward James Olmos had been cast as Sanchez, a military general. In August 2018, Olmos announced that his role had been cut from the final film, to reduce the film's long running time, as his character wasn't integral to the plot.

Filming was scheduled to begin in February 2017 in Vancouver, British Columbia. On November 21, 2016, Larry Fong was confirmed to be hired as cinematographer for the film. Black announced that filming began on February 20, 2017. Filming wrapped on June 2, 2017. Additional photography in Vancouver took place in March 2018. On July 6, 2018, it was revealed the film's third act was entirely re-shot due to test screenings.

Henry Jackman is set to provide the music score for the film.

The Predator was originally slated by 20th Century Fox for a March 2, 2018 release date, before the date was pushed forward to February 9, 2018. It was then pushed back to August 3, 2018. In February 2018, the released date was pushed back to September 14, 2018. The film will also be released in IMAX theatres. On May 10, 2018, the first trailer was released. A television spot was released on June 9, while second full trailer was released on June 26, 2018. The film will have its world premiere at the Toronto International Film Festival, which will happen on September 6-16, 2018.

In the United States and Canada, The Predator will be released alongside White Boy Rick, A Simple Favor and Unbroken: Path to Redemption, and is projected to gross $25-30 million in its opening weekend.

The producer, John Davis, says that The Predator will set up two sequels that he hopes Shane Black will return to direct. About this, Black said: "I would love to say we've been planning a trilogy, but I take one day at a time, in motion-picture terms that's one movie at a time."

Retrieved from "https://movies.fandom.com/wiki/The_Predator?oldid=264590"
Community content is available under CC-BY-SA unless otherwise noted.