View src
watch 02:24
Wiki Targeted (Entertainment)
Do you like this video?
Play Sound
The Purge 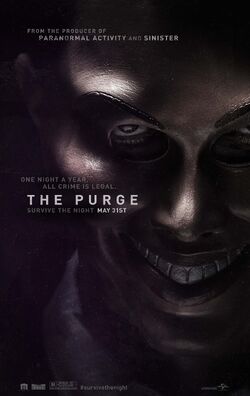 The Purge is a 2013 sci-fi/thriller written and directed by James DeMonaco. Ethan Hawke and Lena Headey star in this "what-if" scenario where all laws are suspended for one night, and citizens are left to police themselves... or not.

In 2022, the United States is a nation reborn ruled by the New Founding Fathers of America. To maintain low crime and unemployment rates throughout the year, the government has instituted an annual 12-hour period called "The Purge" during which all criminal activity, including murder, becomes legal. The only rules during The Purge are that "Level 10" government officials must remain unharmed and usage of weaponry above "Class 4" is forbidden. The Purge is designed to act as an outlet for the American people, so that they may vent all negative emotions however they desire.

James Sandin (Ethan Hawke) is a wealthy salesman who has made a fortune selling home security systems that are specifically designed for The Purge. One of the neighbors, Grace, tells James' wife Mary (Lena Headey) the neighbors have been gossiping that the extension on the Sandins' house was financed by the security systems James sold them. At their heavily-fortified house, Mary struggles with their two children, Zoey (Adelaide Kane) and Charlie (Max Burkholder); Zoey is dating an older boy named Henry (Tony Oller) whom Zoey's father doesn't approve of, and Charlie questions the need for The Purge. When James arrives home, he explains the Purge to the family.

After dinner, Charlie fixes a remote controlled robot he uses to view and film events around the house. The family gathers in the lounge, where James initiates the lockdown, shielding all the doors and windows of the house. An official Emergency Alert System message appears on television, which explains the rules of The Purge and that all emergency services will be suspended during the 12-hour period. Sirens begin blaring outside, announcing the commencement of the Purge. Zoey asks to be excused to her bedroom, where she finds Henry, who snuck into the house before the lockdown. Henry explains to Zoey he wants to convince James to bless their relationship and figured he could not be thrown out of the house during The Purge.

James and his family watch the events of The Purge unfold via the video monitors in the lounge. After a while, Charlie is left alone in the lounge and notices a wounded man, known as "Bloody Stranger" (Edwin Hodge), outside the house pleading for help. Charlie deactivates the security system and lets him in. James intercepts the stranger and holds him at gunpoint. Henry appears and opens fire on James, attempting to eliminate the obstacle preventing his relationship with Zoey. James fatally shoots Henry, and in the confusion the stranger escapes to hide within the house. Zoey runs off with the fatally-wounded Henry and watches him die. James then goes off in search of his daughter and the stranger.

Minutes later, a group of masked "purgers", led by a character known as "Polite Leader" (Rhys Wakefield), arrive up the street, trace the stranger to the Sandin's home, and issue an ultimatum to the family through the security system. He says "Our target for this year's purge is hiding in your home. You have one hour to find him and give him to us. Or we will kill all of you." Mary asks James if the security system will withstand such an attack, and James admits it was designed to act as a deterrent, but not to withstand any number of types of aggressive assaults.

Using his robot, Charlie finds the stranger and leads him to a secret hiding place. Zoey, seeking to also hide there, inadvertently stumbles into the stranger, who holds her at gunpoint (to protect himself until The Purge ends). James pounds a vase on the stranger's head. James and Mary tie up the stranger and, to subdue him, aggravate his wounds, in preparation to deliver him to the attackers. After seeing James with Zoey, the Bloody Stranger sadly tells James to take him outside. However, the Sandins have a change of heart after realizing they are becoming essentially no different than the purgers outside.

The hunters successfully break into the household and the Sandins are forced to defend themselves. A couple of the purgers stumble upon James, whence they try to kill him. However, James kills them. The Polite Leader fatally stabs James with a Bowie knife, but Zoey shoots and kills him. Suddenly, the Sandins' neighbors arrive and finish off the last of the intruders. Mary thanks them, but the neighbors reveal they are there to kill the Sandins; since the opportunity presented itself, they decided it was their patriotic duty to kill the Sandins in order to vent their hatred for the family's new-found wealth.

Just as the neighbors are about to kill the family, the Bloody Stranger comes to the Sandin's aid. He saves the family partially by shooting Mr. Cali 5 times in the chest. As he falls down and dies, while the stranger gives Mary the choice to let the other four live or die, and she decides to spare them, as too many people have died during the night. Grace makes one final attempt to kill Mary, but Mary deflects the attack and hits her face with the butt of her gun and smashes her face into a glass table, as a warning. The surviving neighbors and the homeless stranger leave the house and walk away as sirens outside start blaring again, signaling the end of the Purge. The Sandin family watches the emergency services arrive outside of their home.

The credits include audio from television broadcasts, stating that this Purge was the most successful one ever due to the record high number of murders, and the Purge will recur as normal next year.[1]