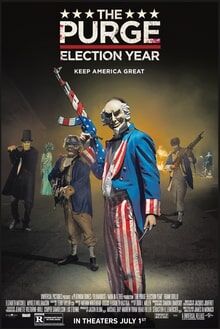 A prequel film titled The First Purge is scheduled to release on July 4, 2018, and will serve as a prequel to the entire series.

About The Purge Event

In 2017, "The New Founding Fathers of America" have established a new totalitarian government and a police state, following economic collapse. Using the 28th amendment of the U.S Constitution, the government has established one night a year - called "The Purge", which occurs on March 21 to 22, in which all crime is legal and all police, fire, and medical emergency services remain unavailable for 12 hours from 7 p.m. until 7 a.m. the next day. The only rules are that no government officials with authorization levels of 10 and higher are to be disturbed and all weapons above Class 4 (explosive devices such as grenades, rocket launchers, bazookas, etc.) are forbidden. Anyone who violates the rules of the Purge would be publicly executed by hanging. The purge has resulted in crime and unemployment rates plummeting to 1% and a strong economy. Although it is thought to be used as an act of catharsis for the U.S. populace, it is in reality used as a method of artificial population control as the unemployed poor in slum neighborhoods are usually the main targets.

The Purge: Election Year has received mixed reviews from critics. On Rotten Tomatoes, the film has a rating of 52% based on 86 reviews and an average rating of 5.3/10. The site's critical consensus reads, "It isn't particularly subtle, but The Purge: Election Year's blend of potent jolts and timely themes still add up to a nastily effective diversion." On Metacritic, the film has a score of 55 out of 100 based on 28 critics, indicating "mixed or average reviews". On CinemaScore, audiences gave the film an average grade of "B+" on an A+ to F scale.