View src
watch 02:24
Wiki Targeted (Entertainment)
Do you like this video?
Play Sound
The Revenant 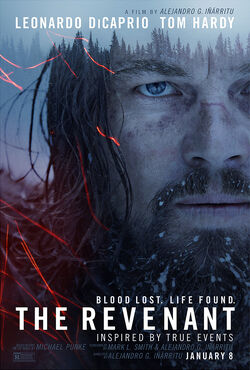 The Revenant (2015) is an American western thriller directed by Alejandro G. Iñárritu, written by Iñárritu and Mark L. Smith, and produced by Iñárritu, Arnon Milchan, Steve Golin, Mary Parent, James W. Skotchdopole, and Keith Redmon. The screenplay was adapted from Michael Punke's 2003 novel of the same name, and is based (partially) on the life of frontiersman Hugh Glass. The Revenant stars Leonardo DiCaprio in the title role, with supporting actors Tom Hardy, Will Poulter, and Domhnall Gleeson.

Inspired by true events, THE REVENANT is an immersive and visceral cinematic experience capturing one man’s epic adventure of survival and the extraordinary power of the human spirit. In an expedition of the uncharted American wilderness, legendary explorer Hugh Glass (Leonardo DiCaprio) is brutally attacked by a bear and left for dead by members of his own hunting team. In a quest to survive, Glass endures unimaginable grief as well as the betrayal of his confidant John Fitzgerald (Tom Hardy). Guided by sheer will and the love of his family, Glass must navigate a vicious winter in a relentless pursuit to live and find redemption. THE REVENANT is directed and co-written by renowned filmmaker, Academy Award winner Alejandro G. Iñárritu (Birdman, Babel).

Development of the film began on August 2001 when Akiva Goldsman purchased Punke's manuscript with the intent of producing the film. The film was originally set to be directed by Park Chan-wook with Samuel L. Jackson in mind to star, and later by John Hillcoat with Christian Bale in negotiations to star. Both directors left the project, and González Iñárritu signed on to direct in August 2011. In April 2014, after several delays in production due to other projects, González Iñárritu confirmed that he was beginning work on The Revenant and that DiCaprio would play the lead role. Principal photography began in October 2014.[1]

The Revenant 2016 at Borobudur Cinema