watch 00:59
The Loop (Movies)
Do you like this video?
The Rundown 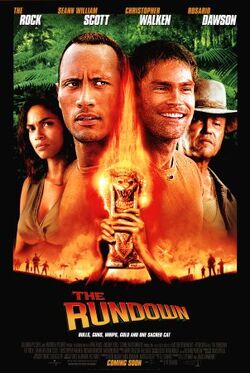 The Rundown (also known as Welcome to the Jungle) is a 2003 American action comedy film directed by Peter Berg. It is starring Dwayne "The Rock" Johnson, Seann William Scott, Rosario Dawson and Christopher Walken. In the film, Johnson plays a bounty hunter who must travel to Brazil to retrieve his employer's son (Scott). The film was released on September 26, 2003, and made $80.9 million on an $85 million budget.

Beck (Dwayne Johnson) is a "retrieval expert", a bounty hunter who collects debts for a man named Billy Walker (William Lucking). He is dispatched to a nightclub to retrieve a championship ring from a football player, and after doing so is assaulted by one of Walker's other collectors. Angry, he confronts Walker and tells him that he wants out of the business. Walker talks him into one last bounty - retrieve Walker's son Travis (Seann William Scott) from a small mining town in Brazil and Walker will give him enough money to open his own restaurant. Beck accepts and leaves for Brazil. When Beck arrives in the town of El Dorado he meets with the man running the mining operation, Cornelius Hatcher (Christopher Walken). Hatcher gives Beck his blessing to grab Travis, but reneges when he finds out that Travis has discovered a missing golden artifact called "O Gato do Diabo”. Beck confronts Hatcher and his men in the local bar and leaves with Travis. On the way back to the airfield, Travis forces their Jeep off the road and into the jungle. There he tries to escape but is re-captured by Beck. After an unfortunate encounter with some local monkeys, the two find themselves in the camp of the local resistance movement.

At the resistance encampment, Travis convinces the rebels that Beck works for Hatcher and was sent to kill them all. After a prolonged fight, Beck gains the upper hand before the rebel leader Mariana (Rosario Dawson) intervenes. She wants Travis, as the Gato can be used to ensure the locals can free themselves from Hatcher. Hatcher suddenly attacks the camp, killing many rebels. Beck, Travis, and Mariana escape the camp and Beck makes Mariana a deal: she helps him get Travis to the airfield in exchange for the Gato. After some searching, Travis leads them to a cave behind a waterfall where the Gato is located. They retrieve it and begin the journey back.

On the way back, Mariana chastises Travis for wanting to sell the artifact, but Travis argues that he actually did want to give it to a museum. Mariana gives the two men Konlobos, a toxic fruit that temporarily paralyzes the eater. As she tells Beck which direction the airfield is, she leaves them with the fire to keep the animals away. After waking up able to move, Beck hauls Travis to the airfield. The local pilot, Declan (Ewen Bremner), tells Beck that Mariana was captured earlier by Hatcher and will probably be killed. Travis pleads with Beck to help, and the two head into town to rescue her. Using a cow stampede for cover, the two begin their assault on Hatcher's goons. Travis becomes trapped by gunfire in a bus, and Beck saves him before the bus explodes. Hatcher tells his brother to take Mariana and the Gato and flee, but they are stopped by Travis. Hatcher confronts Beck, who offers him the chance to leave town, which Hatcher initially refuses. After he is shot by the townspeople, Hatcher agrees to leave town, but eventually dies from his gunshot wounds. Travis gives the Gato to Mariana before leaving with Beck, who tells him that despite all they've been through he must still return Travis to the United States. Travis is delivered to his dad who begins to verbally and physically abuse him. Beck asks to celebrate with them and gives Walker and his men Konlobos. As they are paralyzed, Beck uncuffs Travis and the duo leave together, with Travis continuing to jokingly annoy Beck.

The Rundown was well received by critics. On Rotten Tomatoes the film has a rating of 71%, based on 148 reviews, with a rating average of 6.4/10. The site's critical consensus reads, "The Rundown doesn't break any new ground, but it's a smart, funny buddy action picture with terrific comic chemistry between Dwayne "The Rock" Johnson and Seann William Scott." Metacritic, which assigns a weighted average score, gives the film a score of 59 out of 100, based on 36 critics, indicating "mixed or average reviews".

Roger Ebert of the Chicago Sun-Times gave the film 3 1⁄2 stars out of 4, saying "The jungle locations give the film a texture and beauty that underlines the out-sized characters."

Despite the positive acclaim, The Rundown was a significant box office failure, grossing just under $81 million worldwide compared to its $85 million budget, which makes a sequel not entirely likely. Director Peter Berg has expressed interest in making a sequel to the film but notes that "no one can ever get motivated and focused enough to do it."

In a interview with Collider.com, Berg wants to make a sequel with Johnson returning and having Jonah Hill to appear.

Retrieved from "https://movies.fandom.com/wiki/The_Rundown?oldid=132645"
Community content is available under CC-BY-SA unless otherwise noted.