Start a Wiki
watch 01:27
The Loop (Movies)
Do you like this video?
The Secret Life of Pets 2 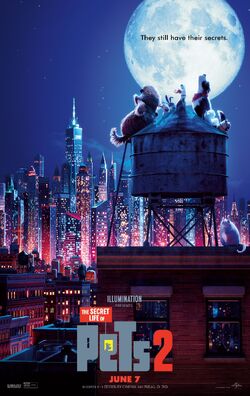 The Secret Life of Pets 2 is a 2019 American 3D computer-animated comedy film produced by Illumination Entertainment. It is directed by Chris Renaud and written by Brian Lynch, and a sequel to the 2016 film The Secret Life of Pets. Most of the cast members reprised their roles except for Louis C.K., who was replaced by Patton Oswalt. Additional cast members include Tiffany Haddish, Nick Kroll, Pete Holmes and Harrison Ford (in his first fully animated film role in 41 years since Star Wars Holiday Special).

The film was released on June 7, 2019, by Universal Pictures.

The Secret Life Of Pets 2 received mixed reviews with a 60% on Rotten Tomatoes based on 154 reviews with an average score of 5.73/10.

Retrieved from "https://movies.fandom.com/wiki/The_Secret_Life_of_Pets_2?oldid=231091"
Community content is available under CC-BY-SA unless otherwise noted.