Start a Wiki
The Secret Life of Walter Mitty 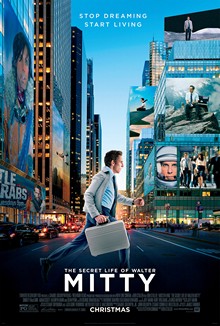 The Secret Life of Walter Mitty is a 2013 romantic adventure comedy-drama film directed by, co-produced by and starring Ben Stiller. Gore Verbinski served as executive producer.

This is the second film adaptation of James Thurber's 1939 short story of the same name. The 1947 version was produced by Samuel Goldwyn and directed by Norman Z. McLeod, with Danny Kaye playing the role of Walter Mitty.

The film premiered at the New York Film Festival on October 5, 2013. It was theatrically released on December 25, 2013 in North America. The film received mixed reviews from critics.

Walter Mitty is a negative assets manager at Life magazine who daydreams of fantastic adventures and has a crush on coworker Cheryl. Walter works with adventurous photojournalist Sean O'Connell, whose work is highly regarded. Sean has sent Walter his latest negatives and a wallet as a gift in appreciation of Walter's work. Sean believes negative #25 captures the "quintessence" of Life and states that it should be used for the cover of the magazine's final print issue as it converts to online status. The negative is missing and Walter is forced to stall obnoxious corporate transition manager Ted, who is handling the downsizing. While viewing the other negatives outside Life's offices, Cheryl approaches Walter and suggests that he think of the negatives as clues to Sean's location. Together they look at three of them, including one of a person's thumb with a unique ring on it, and the other of a curved piece of wood. A third picture of a boat leads Walter to determine that O'Connell is in Greenland. Walter flies there to find him.

A bartender in Greenland explains that Sean left on a ship. To find him, Walter would need to go on the postal helicopter, and the pilot is drunkenly singing a karaoke version of "Don't You Want Me" in the bar. Walter recognizes the pilot's thumb with the unique ring and realizes he is on the right track. He at first declines to fly with the intoxicated pilot, but imagines Cheryl singing to him "Space Oddity", gains a new confidence and boards the helicopter. Nearing the ship, Walter learns the helicopter cannot land upon it. Walter misunderstands the pilot; instead of jumping into a dinghy boat nearing to catch him, he dives into ice-cold, shark-infested waters before being brought aboard.

Walter learns that Sean left the ship earlier. The crew offers Walter some cake Sean left behind. Walter discovers Sean's destinations in the wrapping paper. Walter's journey continues to Iceland, where Sean is photographing the volcano Eyjafjallajökull. Walter is forced to abandon the search after receiving a text message recalling him to New York.

For failing to recover the negative, his first failure in a long career with the magazine, Walter is fired. He learns that Cheryl, who was let go earlier, seems to have reconciled with her estranged husband. Walter returns home discouraged, throwing away the wallet when he visits his mother. To his surprise, Walter recognizes the curve of the piano in his mother's house while looking at the last photograph. When asked, Walter's mom mentions having met Sean. She had told Walter before but while daydreaming he failed to hear her.

Walter discovers O'Connell is in the Himalayas, and finds him trying to photograph a rare snow leopard. When asked about the negative, Sean explains that the message to "look inside" was literal; the negative was in the wallet. When pressed to reveal the image on the negative, Sean dismisses the question and joins a soccer game with some locals. Walter flies to Los Angeles but is detained by airport security during a misunderstanding. Walter calls the only person he knows in Los Angeles: Todd Maher, a representative at eHarmony who has kept in contact during Walter's adventures.

While helping his mother sell her piano, Walter recounts his story, but mentions he does not have the wallet anymore. His mother says she always keeps his knick knacks and produces the wallet. An emboldened Walter delivers the negative to Life magazine, tells management that it was the photograph Sean O'Connell wanted for the final issue, and berates Hendricks for disrespecting the staff that made the magazine so honored.

Walter reunites with Cheryl and learns that Cheryl's ex-husband was only at her house to repair the refrigerator. Walter tells Cheryl of his adventures and admits that he does not know what negative #25 shows. Walter and Cheryl see the final issue of Life at a newsstand, with its cover dedicated to the staff. It is accompanied by the photograph from negative #25, showing Walter sitting outside the Life building, examining a contact sheet with an eyepiece. Walter and Cheryl walk down the busy city street holding hands. 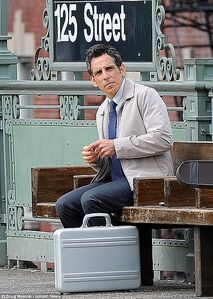 Retrieved from "https://movies.fandom.com/wiki/The_Secret_Life_of_Walter_Mitty_(2013)?oldid=120482"
Community content is available under CC-BY-SA unless otherwise noted.