Start a Wiki
watch 01:48
The Loop (Movies)
Do you like this video?
The Secret World of Arrietty 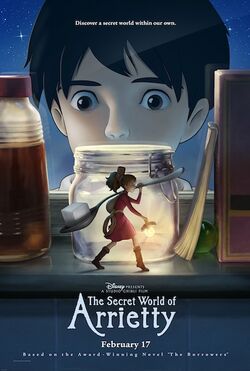 The Secret World of Arrietty, known in Japan as simply Arrietty, is an animated film directed by Hiromasa Yonebayashi, and made by Studio Ghibli. It is based on the 1952 novel, The Borrowers, by English author Mary Norton.

The Secret World of Arrietty is about a borrower, a tiny person who borrows the belongings of regular-sized humans in order to make a life for herself, living under the floorboards of the house of a boy named Sho, who is living with his great aunt Sadako and who has had a serious heart condition since birth. Arrietty and her family must flee when Sadako's maid begins to notice a disturbance under the floorboards.

Japanese Poster
Add a photo to this gallery

Retrieved from "https://movies.fandom.com/wiki/The_Secret_World_of_Arrietty?oldid=78631"
Community content is available under CC-BY-SA unless otherwise noted.