Start a Wiki
The Shining 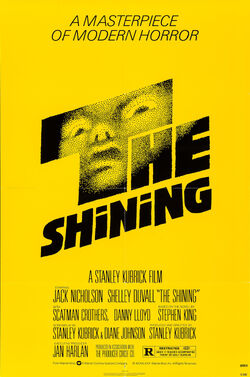 The Shining is a 1980 psychological horror film that was directed, co-produced, and co-written by Stanley Kubrick. The film is based on the 1977 Stephen King novel of the same name. Despite initially receiving mixed reviews from critics, The Shining is today regarded as a masterpiece, as well as one of the scariest and most influential films ever made. Martin Scorsese, an avid fan of Kubrick's films, ranked it as one of the 11 scariest horror movies of all time.

Jack Torrance (Jack Nicholson) arrives at the Overlook Hotel to interview for the open position of winter caretaker. The hotel itself is built on the site of an Indian burial ground and becomes completely snowbound during the long winters. Manager Stuart Ullman (Barry Nelson) warns him that a previous caretaker got cabin fever and killed his family and himself. Jack’s son, Danny (Danny Lloyd), has ESP and has had a terrifying premonition about the hotel. Jack's wife, Wendy (Shelley Duvall), tells a visiting doctor about Danny's imaginary friend Tony and that Jack had given up drinking because he had physically abused Danny after a binge.

The family arrives at the hotel on closing day and is given a tour. The elderly African-American chef Dick Hallorann (Scatman Crothers) surprises Danny by speaking to him telepathically and offering him some ice cream. He explains to Danny that he and his grandmother shared the gift, which he calls "shining." Danny asks if there is anything to be afraid of in the hotel, particularly Room 237. Hallorann tells Danny that the hotel itself has a "shine" to it along with many memories, not all of which are good. He strictly advises Danny to stay out of room 237.

A month passes and Jack's writing project is going nowhere. Meanwhile, Danny and Wendy have fun and go in the hotel's hedge maze; Jack discovers a model of this maze, showing Wendy and Danny inside it, in one of the hotel lounges. Wendy is concerned about the phone lines being out due to the heavy snowfall and Danny has more frightening visions. As time passes, Jack slowly starts acting strange and frustrated, often prone to violent outbursts. Danny’s curiosity about Room 237 finally gets the better of him when he sees the room has been opened. Later, Danny shows up injured and visibly traumatized, causing Wendy to think that Jack has been abusing Danny.

Jack wanders into the hotel’s Gold Room where he meets a ghostly bartender named Lloyd (Joe Turkel) who serves him bourbon on the rocks. Jack complains to the bartender about his relationship with Wendy. Afterward, Wendy shows up and apologizes for accusing Jack, explaining that Danny told her a "crazy woman in one of the rooms" was responsible for his injuries. Jack investigates Room 237 and has an encounter with the ghost of a dead woman there, but tells Wendy he saw nothing. Wendy and Jack argue about whether Danny should be removed from the hotel and Jack returns to the Gold Room, now filled with ghosts having a costume party. Here, he meets who he believes is the ghost of the previous caretaker, Grady (Philip Stone), who tells Jack that he has to "correct" his wife and child. Later, Jack sabotages the hotel's two-way radio and the snowcat, cutting off both communication with and access to the outside world.

Meanwhile, in Florida, Hallorann gets a premonition that something is wrong at the hotel and takes a flight back to Colorado to investigate. Danny starts calling out the word "redrum" frantically and goes into a trance, now referring to himself as "Tony." Wendy discovers Jack's typewriter and that he has been typing endless pages of manuscript repeating "All work and no play makes Jack a dull boy" formatted in various styles. Horrified, she confronts Jack, but he attacks her before she knocks him unconscious with a baseball bat and locks him in a kitchen pantry. Jack converses through the door with Grady, who then unlocks the door, releasing him.

Danny has written "REDRUM" in lipstick on the door of Wendy’s bedroom, which is "MURDER" spelled backwards as seen from a mirror. At that moment, Jack, armed with a fire axe, begins to chop through the door leading to his family's living quarters. In a frantic maneuver, Wendy sends Danny out through the bathroom window but cannot fit through it herself. Jack then starts chopping down the bathroom door with the axe and leers through the hole he has made, shouting the now iconic "Here's Johnny!" line, but backs off after Wendy slashes his hand with a butcher knife. Hearing the engine of a snowcat Halloran has borrowed to get up the mountain, Jack leaves the room and begins to wander about the hotel, ambushing and killing Hallorann with the axe in the lobby. Jack then pursues Danny into the hedge maze by following his footprints, but is misled when Danny manages to walk backwards in his own tracks and leaps behind a corner, covering his tracks with snow. Wendy and Danny escape in Hallorann's snowcat while Jack slowly freezes to death in the hedge maze.

In the final scene, the camera slowly zooms in on an old photograph taken at the hotel on July 4, 1921 as Midnight, the Stars, and You is played through the hallways. A smiling Jack Torrance is at the front of the crowd of revelers, in which it is revealed in a documentary that it is an old incarnation of Jack.

The ending of The Shining consists of an almost two-minute long camera shot that zooms into a picture of Jack Torrance at the July 4th Ball in 1921, right before fading to black and having the credits appear right after. At first thought, this does not make any sense; Torrance was not an adult in 1921. Just this picture of him has sparked wide debates over the meaning of the entire film. One of the most early interpretations was by Bill Blakemore, who suggested that the whole film was a metaphor representing the genocide of Native Americans.

During a tour of the hotel, Stuart Ullman tells Wendy that the staff had to fend off some Indian attacks because the hotel was built on an Indian burial ground. This relates to the picture of the July 4th Ball, and Blakemore says that it is connected because the Fourth of July was no "ball" or "celebration" to the Indians. It is also subliminal, but obvious, that there is lots of Indian artwork on the walls of the hotel, as well as an American flag near the ceiling of the large room where Jack writes his novel.

Retrieved from "https://movies.fandom.com/wiki/The_Shining?oldid=182315"
Community content is available under CC-BY-SA unless otherwise noted.