View src
watch 01:33
Wiki Targeted (Entertainment)
Do you like this video?
Play Sound
The Social Network 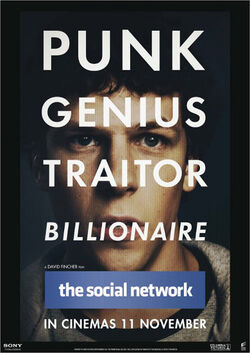 The Social Network is a 2010 American drama film directed by David Fincher and written by Aaron Sorkin. Adapted from Ben Mezrich's 2009 book The Accidental Billionaires: The Founding of Facebook, A Tale of Sex, Money, Genius, and Betrayal, the film portrays the founding of social networking website Facebook and the resulting lawsuits. It stars Jesse Eisenberg as founder Mark Zuckerberg, along with Andrew Garfield as Eduardo Saverin and Justin Timberlake as Sean Parker, the other principals involved in the website's creation. Neither Zuckerberg nor any other Facebook staff were involved with the project, although Saverin was a consultant for Mezrich's book. The film was released in the United States by Columbia Pictures on October 1, 2010.

The film received widespread acclaim, with critics praising it for its screenplay, editing, score, acting, and direction. However, some people, including Zuckerberg himself, criticized the film for what they said were its many inaccuracies. The Social Network appeared on 78 critics' Top 10 lists for 2010; of those critics, 22 had the film in their number-one spot. Rolling Stone's Peter Travers said "The Social Network is the movie of the year. But Fincher and Sorkin triumph by taking it further. Lacing their scathing wit with an aching sadness, they define the dark irony of the past decade." It was also Roger Ebert's selection for the best film of the year.

In late 2003, 19-year old Harvard University student Mark Zuckerberg is dumped by his then girlfriend Erica Albright. After returning to his dorm, Zuckerberg writes an insulting entry about Albright on his LiveJournal blog and then creates a campus website called Facemash by hacking into college databases to steal photos of female students, and allowing site visitors to rate their attractiveness. After traffic to the site crashes parts of Harvard's computer network, Zuckerberg is given six months of academic probation. However, Facemash's popularity attracts the attention of Harvard upperclassmen and twins Cameron and Tyler Winklevoss and their business partner Divya Narendra. The trio invite Zuckerberg to work on Harvard Connection, a social network for Harvard students aimed at dating.

After agreeing to work on the Winklevoss twins' concept, Zuckerberg approaches his friend Eduardo Saverin with an idea for what he calls Thefacebook, an online social networking website that would be exclusive to Ivy League students. Saverin provides $1,000 in seed funding, allowing Mark to build the website, which quickly becomes popular. When they learn of Thefacebook, the Winklevoss twins and Narendra are incensed, believing that Zuckerberg stole their idea while keeping them deliberately in the dark by stalling on developing the Harvard Connection website. They raise their complaint with Harvard President Larry Summers, who is dismissive and sees no value in either disciplinary action or Thefacebook website itself.

Saverin and Zuckerberg meet fellow student Christy Lee, who asks them to "Facebook me", a phrase which impresses both of them. As Thefacebook grows in popularity, Zuckerberg extends the network to Yale University, Columbia University and Stanford University. Lee arranges for Saverin and Zuckerberg to meet Napster co-founder Sean Parker, who presents a vision for the company that impresses Zuckerberg. He also suggests dropping the "The" from Thefacebook. At Parker's suggestion, the company moves to Palo Alto, with Saverin remaining in New York to work on business development. After Parker promises to expand Facebook to two continents, Zuckerberg invites him to live at the house he is using as company headquarters.

While competing in the Henley Royal Regatta for Harvard, the Winklevoss twins discover that Facebook has expanded to Oxford, Cambridge, and the LSE and decide to sue the company for theft of intellectual property. Meanwhile, Saverin objects to Parker making business decisions for Facebook and freezes the company's bank account in the resulting dispute. He later relents when Zuckerberg reveals that they have secured $500,000 from angel investor Peter Thiel. However, Saverin confronts Zuckerberg and Parker when he discovers that the new investment deal allows his share of Facebook to be diluted from 34% to 0.03%, while maintaining the ownership percentage of all other parties. His name is removed from the masthead as co-founder. Saverin vows to sue Zuckerberg for all the company's shares before being ejected from the building. Later, a cocaine possession incident involving Parker and his attempt to place the blame on Saverin finally convinces Zuckerberg to cut ties with him.

Throughout the film, the narrative is intercut with scenes from depositions taken in the Winklevoss twins' and Saverin's respective lawsuits against Zuckerberg and Facebook. The Winklevoss twins claim that Zuckerberg stole their idea, while Saverin claims his shares of Facebook were unfairly diluted when the company was incorporated. At the end, Marylin Delpy, a junior lawyer for the defense, informs Zuckerberg that they will settle with Saverin, since the sordid details of Facebook's founding and Zuckerberg's own callous attitude will make him highly unsympathetic to a jury. After everyone leaves, Zuckerberg is shown sending a friend request to Albright on Facebook and then refreshing the webpage every few seconds as he waits for her response.

The epilogue states that Cameron and Tyler Winklevoss received a settlement of $65 million, signed a non-disclosure agreement, and rowed in the 2008 Beijing Olympics, placing sixth; Eduardo Saverin received a settlement of an unknown amount and his name was restored to the Facebook masthead as a co-founder; the website has over 500 million members in 207 countries and is valued at 25 billion dollars; and Mark Zuckerberg is the world's youngest billionaire.

The film met with universal acclaim. Rotten Tomatoes reports a rating of 96% "Certified Fresh". The site's consensus reads "Impeccably scripted, beautifully directed, and filled with fine performances, The Social Network is a riveting, ambitious example of modern filmmaking at its finest." The film also holds a score of 95 based on 42 reviews on Metacritic, indicating "universal acclaim" and making it one of the site's highest-rated movies of all time.

Roger Ebert of the Chicago Sun-Times, giving it four stars and naming it the best film of the year, wrote: "David Fincher's film has the rare quality of being not only as smart as its brilliant hero, but in the same way. It is cocksure, impatient, cold, exciting and instinctively perceptive." Peter Travers of Rolling Stone, gave the film his first full four star rating of the year and said: "The Social Network is the movie of the year. But Fincher and Sorkin triumph by taking it further. Lacing their scathing wit with an aching sadness, they define the dark irony of the past decade." The Harvard Crimson review called it "flawless" and gave it five stars. Quentin Tarantino listed The Social Network as one of his favorite 20 movies of the year, second to Toy Story 3.

Some reviewers pointed out that the film plays loosely with the facts behind Facebook's founding. Joe Morgenstern in The Wall Street Journal praised the film as exhilarating but noted: "The biographical part takes liberties with its subject. Aaron Sorkin based his screenplay on a contentious book, Ben Mezrich's The Accidental Billionaires, so everything that's seen isn't necessarily to be believed."

The film won Best Picture from the National Society of Film Critics, the New York Film Critics Circle, the Los Angeles Film Critics Association, and the National Board of Review, making it only the third film in history (after Schindler's List and L.A. Confidential) to sweep the "Big Four" critics. The film also won the "Hollywood Ensemble Award" from the Hollywood Awards. The Social Network appeared on 78 critics' top 10 lists for 2010, of those critics 22 had the film in their number one spot.

The Social Network appeared on over 70 critics' top ten lists of the best films of 2010. Over a dozen publications ranked the film first in their lists.