The Son of Bigfoot (or Bigfoot Junior) is a Belgian and French CGI-animated adventure film that was released on 11 August 2017 in several countries. It is directed by Ben Stassen and Jeremy Degruson. produced by StudioCanal and nWave Pictures.

Follow Adam, a solitary teenager, as he sets out to trace back his long-lost father. Deep into the woods, Adam is faced with an unbelievable revelation: his father is no other than… Bigfoot. As they start making up for lost time, they’re faced with the menace of two greedy hunters. Join Bigfoot and son, and all their quirky woodland animals friends, for the adventure of a lifetime!

The story begins when Adam's father, Bigfoot, is hunted by HairCo. 12 years later, in high school, Adam is teased by jock bullies who spit bubblegum onto his head. As this happens, his feet stick out of his shoes. Startled, he ends school on a low note, as the bullies find him in the gym and push him around until his backpack is thrown into the basketball hoop(which the bullies get suspended for).When he comes home, Shelly cuts his hair after opposing to chew the gum out. In the morning, Adam realizes that his hair grows again and he takes a green hat to hide his hair. Shelly sees and was surprised that she cut hair for him carelessly, and she tells the story about the hat which Adam is wearing.

Adam goes to school and he sits with a girl, but his bullies threaten they will hit him on the way home. The principal brings the bag back to him and advises him not to fight and throw the bag in the basketball hoop. While he is talking to the secretary, Adam immediately eats all candies on the table. And he runs away before the principle realized. On the way home, they take Adam's hat but he took back and they chase him until Adam comes in home, and they warned him by throwing rocks into his house. However, Adam discovers the letters and his father's address in a metal box. When his mother comes home, he says why she said his father died, while she and he sent the letters each other. At last, she says she told that to protect him. At midnight, Adam sneaks out and wants to meet his father, who lost long. He has a truck driver take him to his father's address. His mother wants to talk with him but realizes that he's gone.

Adam goes into the forest, but runs into trap and falls down onto the street. At that time, a truck was approaching and comes to a screeching halt as it sees the unconscious Adam. Suddenly, swiftly, a figure comes and takes Adam away. The truck driver checks his camera and sees a shadow of Bigfoot. He immediately finds to the public telephone and calls 911, but no one believes; and last, he calls for advisory switchboard to connect to HairCo.

In the middle of the forest, in a house on the tree, he sees Bigfoot and runs out, but Bigfoot catches him, saying he is Adam's father. At first, Adam didn't believe because of his so-called dad's appearance, but later on, he sees the picture on the wall and realizes his father. They begin to speak about Adam's father's disappearance, and Adam's dad(named as Dr. Harrison) explains that Wallace Eastman, the owner of HairCo, tried to take Dr. Harrison, and make him a lab rat. After all the explanation is done, Bigfoot tells Adam that soon he(Adam) will become just like Bigfoot himself and soon be just like Bigfoot. Meanwhile Shelly attempts to search for Adam only to be stopped at a roadblock created by HairCo, Shelly attempts to escape by revesing only to be blocked by a HairCo car. Afterwards, Dr. Harrison shows Adam his powers,(which super-speed, echolocation, and the ability to speak to animals!) and soon Adam befriends an inviting bear named Wilbur, a loudmouth raccoon named Trapper, his pregnant wife Weecha, a woodpecker named Steve, and a speedy red squirrel named Tina. The team soon plays a trick on 2 unsuspecting hunters and strengthen even more, their friendship with Adam. 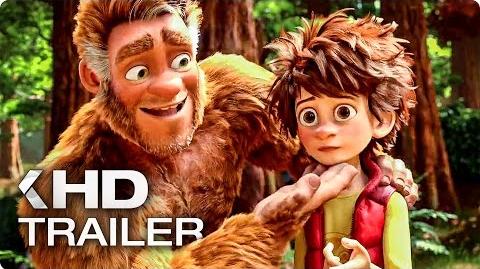 THE SON OF BIGFOOT International Trailer (2017) 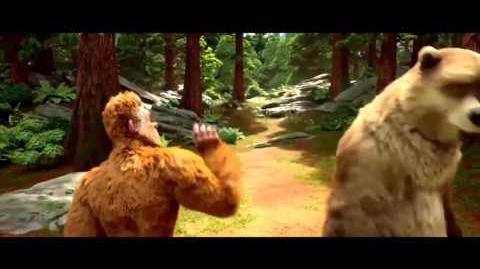 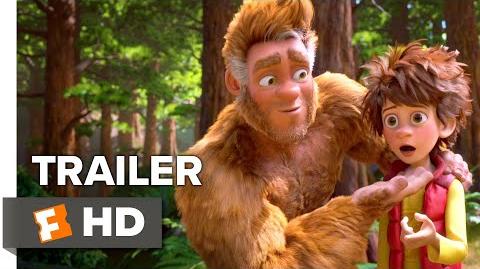 The Son of Bigfoot at the Internet Movie Database

Retrieved from "https://movies.fandom.com/wiki/The_Son_of_Bigfoot?oldid=242765"
Community content is available under CC-BY-SA unless otherwise noted.