Start a Wiki
The Spy Who Dumped Me 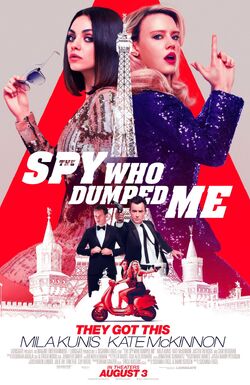 The Spy Who Dumped Me is an American action comedy film directed by Susanna Fogel and co-written by Fogel and David Iserson. The film stars Mila Kunis, Kate McKinnon, Justin Theroux, and Sam Heughan. It was scheduled to be released on July 6, 2018, but will be released on August 3, 2018 by Lionsgate.

Audrey and her best friend Morgan find themselves embroiled in a major international conspiracy when Audrey's ex-boyfriend unexpectedly re-enters her life with a team of assassins on his trail and reveals that he is actually a CIA agent.

The film began production in Budapest, Hungary in July 2017.

The film was originally scheduled to be released on July 6, 2018, but, after "a phenomenal test screening", it was pushed back a month to August 3, 2018.

Retrieved from "https://movies.fandom.com/wiki/The_Spy_Who_Dumped_Me?oldid=133379"
Community content is available under CC-BY-SA unless otherwise noted.