Start a Wiki
The Strangers: Prey at Night 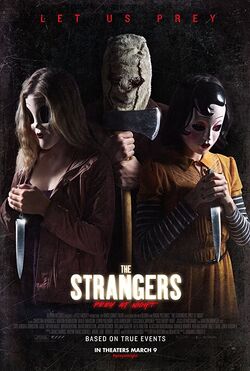 In a secluded trailer park in Covington, Kentucky, the three masked strangers — Dollface, Pin-Up, and the Man in Mask — arrive in a truck at night to a couple's new trailer. Dollface wakes a sleeping female occupant, knocking at the front door. Dollface instantly kills her and then lies down in bed next to the woman's sleeping husband in a creepy manner.

Meanwhile, Mike and his wife Cindy take a family trip with their children, Luke and Kinsey, to their aunt and uncle's trailer park to spend time together before Kinsey leaves for boarding school. After arriving, they meet an unmasked Dollface at the front door. She asks for Tamara, but is turned away by Cindy. Kinsey and Luke stumble upon a trailer with the door open. Inside, they find their aunt and uncle brutally murdered.

Back at the family trailer, Dollface visits a second time and is yet again turned away. Troubled by the encounter, Mike and Cindy find the kids, who are in hysterics. Mike follows Luke to find the bodies. Cindy and Kinsey return to the trailer to find their cell phones destroyed and a masked Dollface inside. Cindy helps Kinsey escape the house before being stabbed to death by Dollface. Mike and Luke find the bodies and find the voicemail that Cindy left for their uncle earlier, realizing that the killers had heard the message and were waiting for them to arrive. After arriving back at the family trailer, they find Kinsey missing and Cindy dead. After a devastating moment, they drive their minivan around, shouting for Kinsey, but the Man in Mask violently throws a brick at the van, causing Mike to swerve into a trailer.

Finding himself pinned to his seat with a long piece of wood impaled to his abdomen, Mike tells Luke to find his sister. After Luke hesitates to leave, the Man in Mask kills Mike with an ice pick. Kinsey is attacked twice and stabbed by Dollface before being rescued by Luke. Luke hides her under a porch and goes to the general store to use the phone but is attacked by Pin-Up. He overpowers her and stabs her to death. An angry Man in Mask stabs Luke in the back and leaves him to die in the pool. Kinsey finds Luke and pulls him out before setting off to find help. A sheriff finds Kinsey but is promptly killed with a slit to the throat by Dollface. Kinsey uses the sheriff's shotgun to shoot Dollface; she unmasks her, and as Dollface bleeds to death, Kinsey asks, "Why are you doing this?" Dollface replies, "Why not?" Kinsey then finishes her off with a shot to the head.

The Man in Mask arrives in his truck and attacks Kinsey. She uses her lighter to ignite a gasoline leak and both vehicles explode, seemingly killing him. The Man in Mask survives the explosion and pursues her in his truck, now engulfed in flames. He exits the truck, burned up, to attack her but falls to the ground, pulling out a piece of glass out of his abdomen and falls seemingly dead. Kinsey flags down a mother and son in a truck, but they attempt to flee when they see the Man in Mask appear. Kinsey manages to climb into the bed of the truck, along with the Man in Mask, swinging his ax at her. Kinsey knocks him off of the truck by hitting him hard in the head with a baseball bat. The Man in Mask is last seen lying in the road, seemingly dead. Some time later at a hospital, Luke is in a bed, recovering from the stab wound. Kinsey awakens from a sudden nightmare. As she gets up, filling a cup of water to refresh, she hears a strange noise along with a familiar knocking at the door and drops the cup in shock.

Retrieved from "https://movies.fandom.com/wiki/The_Strangers:_Prey_at_Night?oldid=182318"
Community content is available under CC-BY-SA unless otherwise noted.