Start a Wiki
watch 01:27
The Loop (Movies)
Do you like this video?
The Sun Is Also a Star 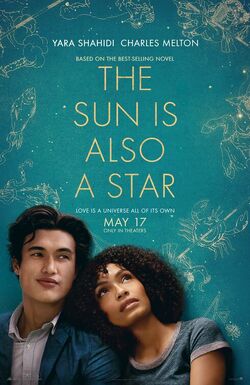 Love is a universe all of its own
Directed By
Ry Russo-Young
Produced By
Elysa Koplowitz Dutton
Leslie Morgenstein
Written By
Tracy Oliver
Based on
The Sun is Also a Star
by Nicola Yoon
Cast
Yara Shahidi
Charles Melton
Jake Choi
Miriam A. Hyman
Edited By
Joe Landauer
Cinematography
Autumn Durald
Distributed By
Warner Bros. Pictures
Country

The Sun Is Also a Star is a 2019 American drama film directed by Ry Russo-Young. The cast of the film consists of Yara Shahidi, Charles Melton, Jake Choi, and Miriam A. Hyman.

The film was released in the United States on May 17, 2019 by Warner Bros. Pictures.

Retrieved from "https://movies.fandom.com/wiki/The_Sun_Is_Also_a_Star?oldid=166514"
Community content is available under CC-BY-SA unless otherwise noted.