Start a Wiki
The Ten Commandments 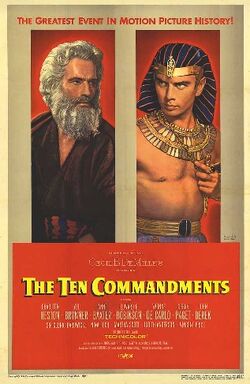 Based on the Holy Scriptures, with additional dialogue by several other hands, The Ten Commandments was the last film directed by Cecil B. DeMille before his death.

To escape the edict of Egypt's Pharaoh, Rameses I, condemning all newborn Hebrew males, the infant Moses is set adrift on the Nile in a reed basket. Saved by the pharaoh's daughter Bithiah, he is adopted by her and brought up in the court of her brother, Pharaoh Seti. Moses gains Seti's favor and the love of the throne princess Nefertiri, as well as the hatred of Seti's son, Rameses. When his Hebrew heritage is revealed, Moses is cast out of Egypt, and makes his way across the desert where he marries, has a son and is commanded by God to return to Egypt to free the Hebrews from slavery. In Egypt Moses's fiercest enemy proves to be not Rameses, but someone near to him who can 'harden his heart'.

Retrieved from "https://movies.fandom.com/wiki/The_Ten_Commandments_(1956)?oldid=130565"
Community content is available under CC-BY-SA unless otherwise noted.